Witchery – I Am Legion 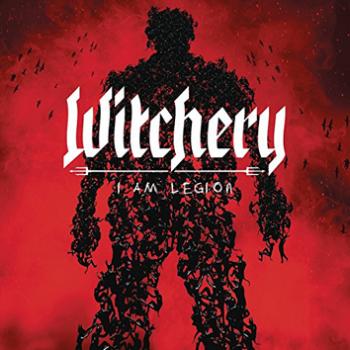 After the release of album ‘’In His Infernal Majesty’s Service’ in 2016, the Swedish blackened thrash/speed metal band Witchery has released their new album only 1 year later, titled ‘I Am Legion’. If you know that ex-frontman from Marduk named Legion has already worked for this band some could say that the title track from this new album is some kind of ode to him, but no, that seems not to be the case hehe. With the loss of frontman  Emperor Magus Caligula in 2016 they gave the vocal duty to Angus Norder on their previous release, and nothing has changed since then involving line-up. Can you expect the same level of musicianship on ‘I Am Legion’? Well, not really, cause when comparing this one with older material (okay, that’s forbidden I know) then it seems to me that the needed experience and appearances that suited this band for years is somewhat vanished. Okay, there are still some quit good tracks on this disc, like for example the uptempo ones ‘Dry Bones’ with the thrashy input and ‘Seraphic Terror’ that is maniacal and personally stands out on this album. But overall seen they used  more mid-tempo, slow moving tracks in my opinion that lack inspiration to comfort me and doesn’t referrer me to the bands’ status. Also the more story-telling kinda vocals and the few groove-additions don’t give this release a boost unfortunately. Nope, this album confused me and hasn’t stilled my hunger. Too pity. (Fredde)