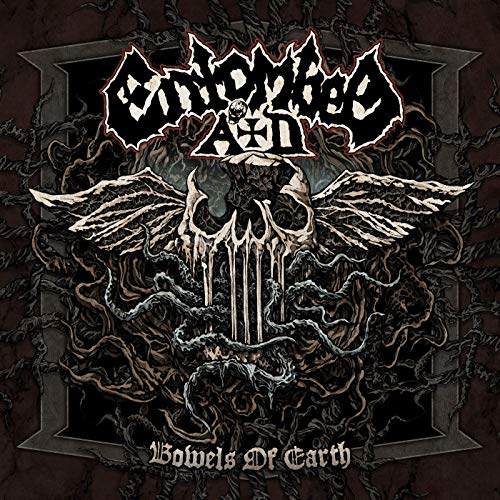 “Bowels of Earth” is the third full-length album from Entombed A.D., the version of Entombed that was formed by original vocalist LG Petrov in 2014 and has been mostly comprised of musicians that played and/or recorded in Entombed through-out it’s history.

There is a riff for every fan of every phase of Entombed on this album. Its got a mix of old school Death Metal, Thrash Metal, Hardcore Punk and Death ‘n Roll. Without breaking the mold or casting a new stone, the overall sound of the album could be described as “safe” but even though its more of the same that Entombed A.D. have become known for it doesn’t mean its a bad thing because it is a good album.

These are the kind of songs that you can’t help but headbang along to with their brutal yet melodic riffs. The songwriting has a very tight structure that grooves effortlessly and the rhythm section very rarely deviates from which in modern days compares to output from Death Metal bands like Jungle Rot or Obituary. A definite highlight across the album is the guitar playing in terms of leads and solos which are phenomenal, they really bring the level of the songs up and break up the sometimes stagnant rhythm sections. Vocals from LG are on point as usual bordering between death growls and hard rock swagger breaching on punk rock snarls.

Although, its pretty much the same old formula, Entombed AD still deliver a thick Death Metal sound highlighted with rock and hardcore elements. “Bowels of Earth” should reverberate with the old guard and the new guard in terms of being able to move your neck and bang forever. (Ted Gloom)