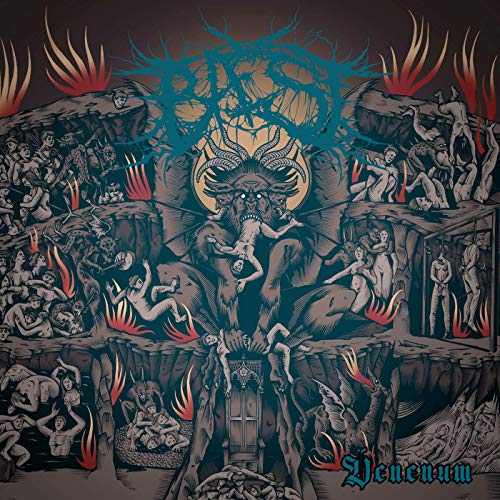 Denmark has some pretty heavy exports. vehicles – there pretty heavy, pharmaceuticals – that’s heavy man and $2.9M of fish so that’s gotta be real heavy. Well now Denmark can add Baest to that list cause I’ve just listened to their album “Venenum” and it would have a relative atomic mass of 300 which is really fuckin heavy. OK, so I looked up the relative atomic mass table and Plutonium is one of the heaviest metals, but I figure that measurement was taken prior to Baest releasing this album.

“Venenum” is 45 minutes of pure and brutal old school death metal and when I say brutal, I mean just like the Vikings that raided and pillaged their way across the world in longboats and all without google earth. Alright Longstretch, enough with the history lesson and export info, back to the review.

So where was I, oh yea “Venenum”, this is fiery death metal insanity complete with old school hooks that dig into your skin like Pinhead from Hellraiser, vocals that would put the screams of Draugen to shame and blast beats that sound like demons climbing the stairs from hell 2 at a time. This is a non-stop assault of your senses with all the subtly of a huge piece of granite to put it mildly.

So, let’s go through a few of the tracks to whet your appetite because if I wrote something about each track, this review would be about 10 pages long.

“Gula” is so heavy and has one of the most brain dissolving chugging riffs that was ever created by man. The atmosphere created within each bar is so suffocating that you imagine yourself drowning in a murky pool of sludge and mire battling just to keep your head afloat, so you don’t miss hearing any of the brilliantly dense and powerful tempos and vocals.

The title track “Venenum” is the complete opposite of “Gula”. This is riff heavy with a shit ton of melody, driving percussion and vocals that are blood soaked in the beauty. “Styx” begins with some classical guitar work showing that Baest are not only vicious and cruel, they but can also be refined and cultured. Ok, so its only for a minute until you are severely beaten by the riffs and aural hammering of “Heresy”.

“Sodomize”, I’m guessing, I don’t need to spell out what this is about. Just be happy in the knowledge it’s about Sodom and you really shouldn’t sing the chorus or chant the title of the track on a crowded bus or alone with your uber driver late at night.

There you have it, Baest have emerged from the Danish underbelly to deliver a no holds barred, head stomping, blood churning and face searing album in “Venenum”. If this is you, then go get yourself a copy, for all you others, still get a copy and play it loud to keep the demons from your door. (Longstretch)