Malevolent Creation – The Will to Kill 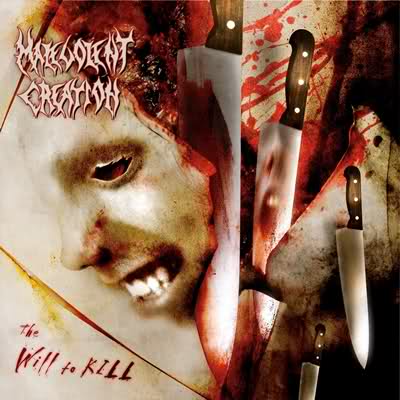 What more can there be said about a band like Malevolent Creation? Albums like “The ten commandments”, “Stillborn” and “Eternal” are pure death-metal classics whether you like it or not. The fact that these guys have been around since the beginning of the nineties, makes it almost self-evident that MC nowadays can be seen as one of the leading bands of the already overcrowded death-metal scene. Well… almost. The truth still stands with the fact that MC still hasn’t received the same amount of credit like colleague death-metal pioneers Morbid Angel and Deicide. No wonder MC is still fighting every inch wide for some recognition. Especially the last two albums “The Fine art of murder” and “Envenomed” have showed that MC is heading back on full speed to reclaim the throne. More importantly one can see that this band is definately going with the flow, while other “oldies” completely fail this kind of process.

With a new release MC is finally capable of showing the world their true “malevolence”. This year’s line-up changes almost made me believe that this could be the end of one of the most brutal bands that I’ve ever known. Yet MC has never been known of giving up easy so new recruitments were found easily: drummer Justin Dipinto (ex-Divine Rapture) replaced Dave Culross, due to the fact that Dave decided to focus on his personal life, and vocalist Kyle Symons (Hateplow) replaced Brett Hoffmann earlier this year. With these new additions the foundations for the new album “The will to kill” were finally complete.

“The will to kill”, MC’s first release for Nuclear Blast, launches all the frustration and hate that was kept hidden deep inside of the death metal machine Malevolent Creation. Flirts with the previous albums have been completely avoided and it’s more than justified to say that this is by far the heaviest album ever released by MC. The typical MC sound still reigns supreme; songs like “The Cardinal’s law” and “Pillage and burn” sound very recognizable and remind me a lot of the “Eternal” album. Yet when you’re taking that typical sound for granted you can clearly hear that there’s a high concentration of Bay-area thrash represented on this album. Especially songs like “Lifeblood” and “Burnt beyond recognition” seem to be shaped by some killer old-school riffs. The highlight of “The will to kill” can be experienced by “Assasin squad”. A song that may well be the most thrash-oriented one ever performed by MC. The special addition to this song comes from guitar legend James Murphy who laid down some striking solos which really brings an old-school feel to the track. Having heard this album a couple of times you’re not even considering the fact that there’s actually another vocalist grunting all the lyrics and another drummer bashing the brains out of his skull. At some point it even sounds like they’ve always been a part of MC.

“The will to kill” is by far the heaviest MC album ever, the best produced MC album ever and more importantly the best MC album ever. Never have I been disappointed by this band and it seems they never will. Leaves me to say the following: “The will to kill” is THE death-metal highlight of the year. I’m still impressed and shocked by the immense violence on this album. It doesn’t matter if you play this album loud or not it still has got the same untouchable effect on you. It awakens something hidden deep inside of you, something you don’t want to be revealed: The urge to kill, or in other words “THE WILL TO KILL”!!!!!!!