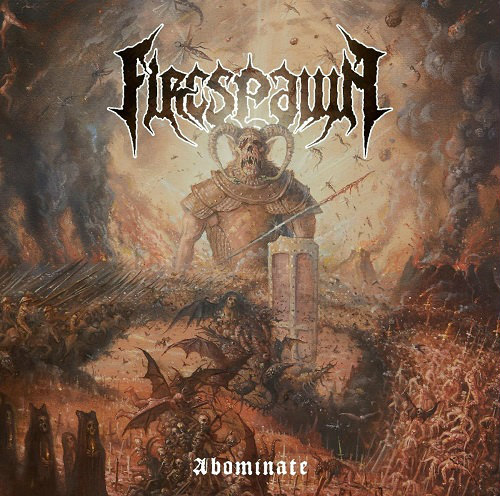 The Swedes, always a driving force for Death Metal, are showing progression in their more American styled Death Metal with their 3rd album called “Abominate“, once again with a Paolo Girardi artwork, once again with a fat production, even better balanced than before and with LG`s best vocal performance for Firespawn so far. I think he found even a better way to incorporate his signature and remarkable voice without sounding too much of Entombed (A.D.).

The range of speed, feelings and fury is wide and makes the album interesting, knowing how to do chord progressions and write some catchy and heavy riffs, memorable choruses and pounding drums and basslines. The blast are tearing things apart and the groove machine is as heavy as panzerbrigade in most of the parts, and that`s why I like this album even better than the first 2. After a good start, the record becomes even better in the second half and wants me to bang my head very hard. The guitar solos are more than average, mostly very melodic and well written and give extra coins to the songs. Would be great to see this band more often live, truly a force to be reckoned with. Thumbs up to Firespawn. (DPF)