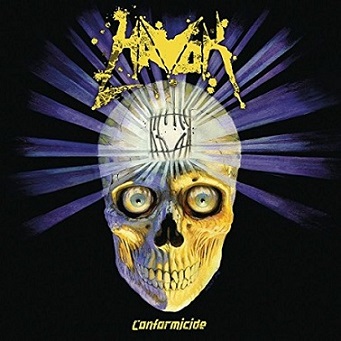 At the moment Century Media signed Havok, the band from the USA was one of the promising Thrash acts of the world. Aggressive and straightforward and yet catchy Thrash Metal the US way. And I have to admit, I’ve given an album like “Time is Up” a spin of 4 as well….at least. The new album is a step forward considering musical craftsmanship as it all get more technical, more breaks, more twists and especially the bass-parts are sticking out. A typical Nocturnus or Steve Digiorgio when-he-was-in-Death kind of bass vibe. And then some…as it sometimes went a bit to funky. There are still some good straightforward Thrash moments on it, for example “Hang ‘em High”, which has a great riff in combination with the bass underneath the chorus. But tracks like “Intention to Deceive” and “Ingsoc” for example…it goes by a bit. I understand a musician grows and want to show it, but always keep in mind what you are good at. “Conformicide” is probably the album with the highest level of musicianship of all the Havok albums, but for me the least enjoyable one to listen to. It’s their “Renewal” after “Coma of Souls” sort of speak….(Ricardo)