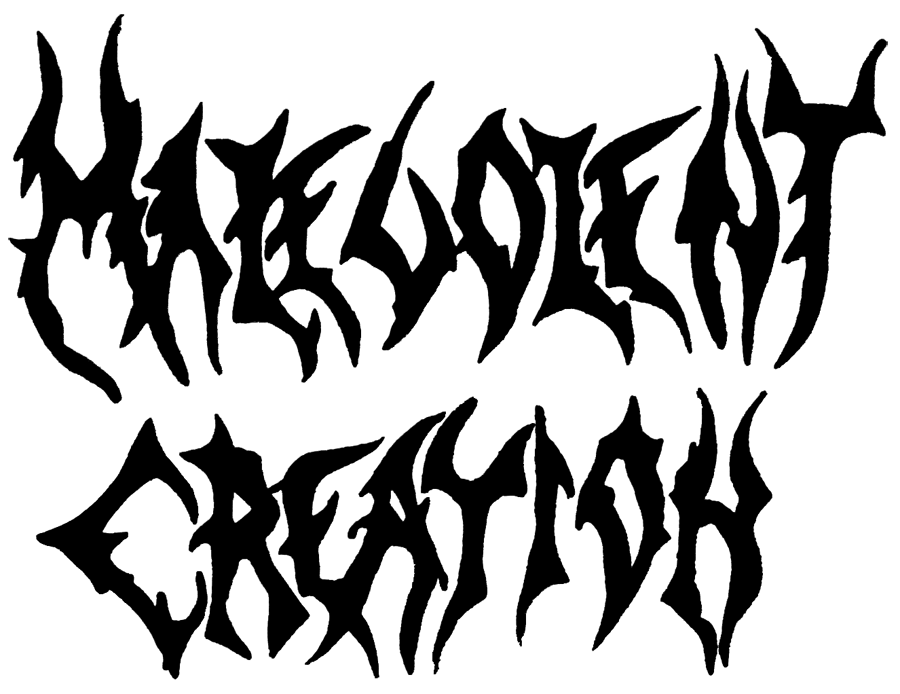 These days, Roadrunner records started re-releasing classics and best-of albums from the days they were still called Roadracer records, and featured many groundbreaking & innovative extreme metalbands. Probably one of the most extreme bands they ever had was, in the meantime existing no less then 16 years, Malevolent Creation. This seems a good opportunity to publish the chat we had last summer, especially since it (after some serious editing) is in no way outdated. We from VM (being a severely drunk (!) Loek and Grandpa Saldiac saving the day, haha) had a very entertaining conversation with the extremely good-humored ‘if you’re too slow you gotta go’ Phil Fasciana. (LoekK & Saldiac)

The fine art of … Playing live…How do you think the show went on the Wacken festival?
Well, you know, it’s an outdoorshow so you never know what the sound is like, but it was really, really good onstage you know. It was the first show, and we’re very happy with it. It was killer.

You said it was your first show?! First show of what..?
Well, of this small tour we did. Wacken, and then some other festivals, like Party-san, and we headlined one night at the Brutal assault festival in the Czech republic. Three festivals, and then go home, preparing for a tour in Brazil.

I read on your website that it got postponed. Apparently they screwed up with visa’s while you were on the Hateplow-tour.
Yeah, don’t get me started, hehe. But everything has been taken care off now, and we’re gonna redo the tour.
I take it that is a headlinetour..?
Yes.
Then why is it that every time I get to see you it’s on a No Mercy festival or so, playing way too early..?
Not much we can do about that. That’s just Metallysee, the booking agency. They’re doing a good job getting us here, but they do always give us shitty spots, hahaha! That’s the reason we don’t do festivals like that no more.

I can image. Don’t you feel offended? I mean; you deliver the goods for like 16 long years..
No, not really. Be we don’t do it again, that’s for sure. We always get fucking treated like shit.

I saw the show today, but was kinda wondering who was behind the drums? Because you do change ‘em quite often and all I could see today was this big pair o’ sunglasses.
Yeah, hahahaha. That was Tony, doing the rockstar look!

Is he a session drummer or is he here to stay?
Well, let’s just say he’s doing this tour with us as our original drummer had a lot of difficulties getting in this country. Law-trouble, you know. Stuff he needs to straighten out first. But you know Tony; he’s truly amazing. And besides his skills also a good friend of ours so we’re lucky with him. He lives next to me and basically knew all our songs, hahaha. That made stuff a lot easier!

The drummer that’s not here right now, will he return to the band?
Hehehe, you know..There are a lot (a LOT!) of people that wanted to drum in our band and for now we just choose Tony. We’ll see what the future brings, right?
Trying to beat the Spinal tap record concerning drummers?
Wahahaha, oh man. No, we don’t . We definitely don’t want that, hehe. But unfortunately we were never very lucking drummer-wise. Maybe one day it’ll stop.

And do you think that’s because of those damn drummers, or because of you’re opinion;
‘If you’re too slow you gotta go!’
Hahaha! – Little bit of both. I don’t know. There are a lot of good drummers out there but we work hard. And a lot of guys just don’t want to do the same. They’re just there for the money, baby. And since we don’t make any, they always realize that pretty soon and leave.

Now that Kyle is singing in MC as well, does Hateplow continue to exist?
Yeah, it’s a real band. But a sideproject. We did a small tour in Europe….
Been there, saw that! Massive!
Were gonna do one more Hateplow record. Just one more, grind it out. And perhaps another small tour, but we’re mainly focusing on MC. It’s more important.

As said, saw one of those shows. Were hardly any people present, probably more bandmembers then paying visistors. How do you think the tour went?
It was ok. It was shit promotion. Some German fucker, I don’t know. Hehe, I heard like it in the afternoon; ‘Hey man, Hateplow plays tonight. You coming’?’ We did some pretty good shows, mostly in Easten Europe which was really weird. We were playing like fucking compounds. Like we were in the middle of some war or so!

Roadrunner records came up with the brilliant and totally new idea to re-release some of their classic bands and MC seems to be one of those. What do you think about that?
Oooh well. We really can’t do anything about it, as they have the rights to the album. I personally don’t really like albums like that unless they’re very special. But Roadrunner put it out, we saw the tracklist. And in the end we’re pretty happy with it, they could’ve made something worse out of it. Put on a couple of livetracks. And we did a Piece by Piece-Slayercover, which is on it. Yeah, we indeed did a Raining Blood cover as wel, but euh..well..hehe..that one sucks. The drums sound like crap.

It does speak for RR that they do make it a kinda special release..
Yeah, it does. There are like 18 or even 19 songs on it, from the first three records. But hey, nothing we can do about it. They’re gonna release it no matter what. For the rest I do support the action, as some of those records are indeed damn hard to find. And for people that only know the band from now, it’s kinda cool to hear how we started. But for me, naah. It aint too excting anymore.

And if you got to choose your own favorite MC-record, what would that be?
The next one, hahaha! But serious, we have some pretty fucking intense stuff written already and it’s gonna be pretty fucking exciting. We’re fucking pumped up, man.

Whatever happened to the re-recordings of the Stillborn album?
Nothing. Hehe. It just never happened. But we booked some extra time for the upcoming recordings, and gonna redo some Stillborn songs then. The songs are really good, and I can’t wait to hear em this way, but Stillborn..Stillborn was just totally fucked up. The singer was drugged up, and Alex (Marquez) drummed like shit back then. I personally find the drumming just weak, and that’s why we’re gonna re-record some songs the way they should sound.
The new album’s gonna include these, some coversongs and probably 12 or 13 new ones.
Will it be released as a 2cd-version?
Perhaps. Maybe. Or as bonustracks. We at least don’t wanna make it limited. Gonna do some promotional video’s too. Perhaps they will be on another disc, who knows.
You never did any in the past.
No. Too much money. In America it sucks because they’re not gonna broadcast it anyway.

I spoke to In Flames earlier and the reason their clip isn’t shown is because someone shows his middle finger..
Not kidding? Hahaha..damn that’s fucking gay! That’s America. Fucking gay country.

You exist for over 16 years now. According to your site you went through a lot. Would you be so kind to please us with some amazing MC-stories?
For me personally that would be the first record. Just recording a record, and touring was something we never thought doing, hehe. Stuff like that, meeting people all over the world, meeting kids everywhere. Just Malevolent freaks. Hehe, bunch of fuckers that know more about the band then I do, haha. It’s awesome to be able to travel all over the world, doing shows like this. It rules. It rules to be around people that are into metal all the time.

And when coming home, do you have to work regular jobs?
Yes, we all do. I work for my own record label. We’re lucky that we have jobs were we can leave and come back. If possible, we of course like to live off the music, but that’s impossible. Just too much on us. We’re touring like fucking ten months out of the year. Too much being around each other all the time. Afraid we end up all killing each other, hahaha!
It’s good to take a break sometimes.

You’re now on Nuclear blast. Do you think you finally found a suitable label for MC?
Yes! Definitely. I wish we would have signed to Nuclear blast a lot earlier man. They do a lot more promotion then any other label has so far. We wanna continue working with them! As long as they want us..

Another thingie I was wondering about; why does the US have a different cover then Europe?
Hehe, they don’t. The same cover is underneath but NB was afraid that the big stores would refuse it, so that’s why.

Most of the new bands are replaying the stuff that you and Suffocation already played 10 years ago. Do you think these bands have anything to offer?
That depends, haha. There is some good stuff out there. But the bands trying to be as extreme as possible are boring to death. Yeah, it’s hard to be original. Everybody has done anything already. I honestly don’t know how more different you can possibly be.

What’s your opinion about all those reunions?
Oh well. To me like bands as Sadus, Destruction..that’s awesome! Like a week ago, before coming here, I saw Nasty Savage. And I always liked em, and they still kicked major ass! We played with em in 1990. Cool to see they’re back.  1990? hehe. You don’t wanna know my age back then..Hahahahaha, no, I guess not..

I saw quite a lot of camera’s on stage. Any dvd-plans?
Yeah, we recorded this for a DVD. Ran into John (Vesano, Nile) the other day, threw my cam in his face and ‘hello, would you please record our show?!’

Is the main part of the DVD this gig?
No, we’re filming a lot. Also the shows in Brasil, as they must be pretty huge as well, and then we’ll just see what comes out. And we shot some in Poland. Better then having only one show, especially since we change the setlist all the time. When we do a DVD we want it to be good. Also have stuff from 1987. We all have short hair and go ‘waaarrgh!’ Sound like Kreator on crack, hahaha. People gonna have a good laugh too.

Any last remarks, something we have forgotten to mention?
Last remark? Ok; this is the coolest thing we ever did. Wacken. Way better as the shit back home. I hate that guy, Jack Koshik. Rips off the bands, the fans. Basically everybody.