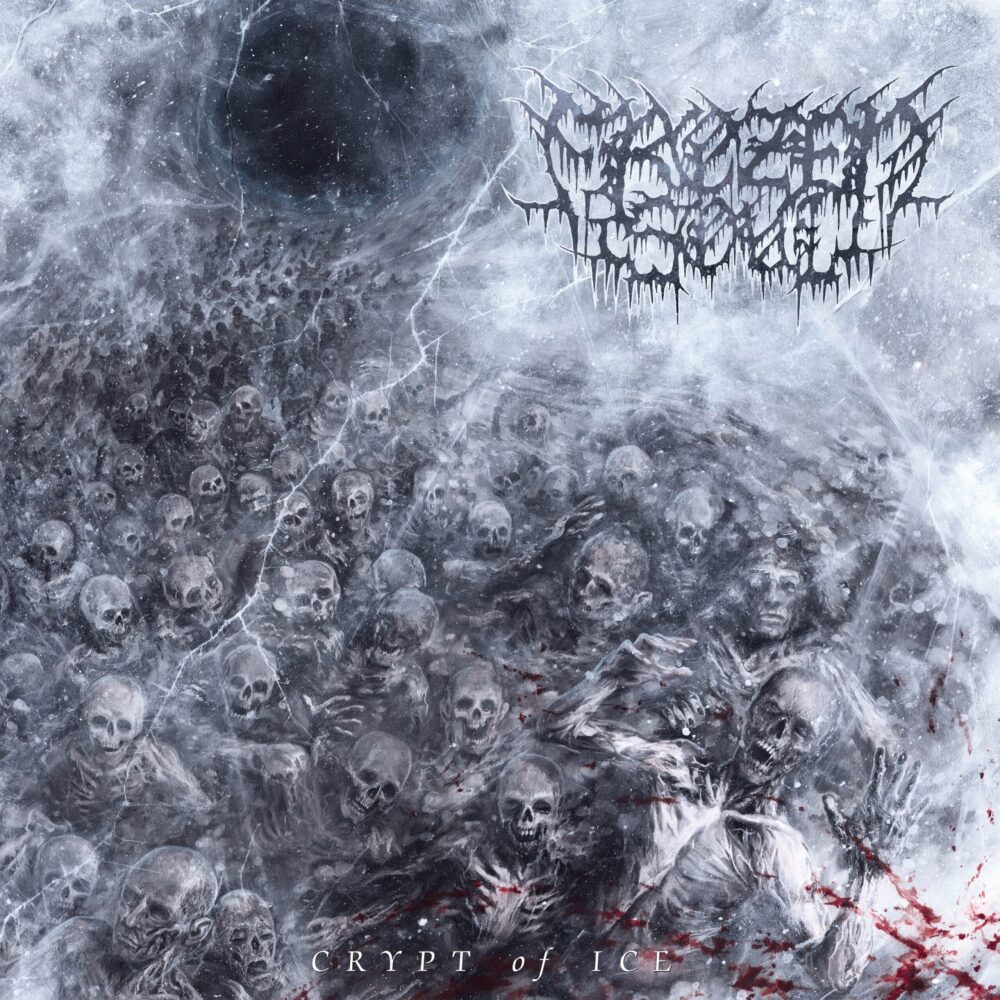 Before we talk about Frozen Soul let’s talk food. Meat and potatoes, and cheeseburgers. Death metal is a bit like meat and potatoes, a lot of people like it, many love it, some think it’s gross, and for others it’s simply their favourite thing – they can’t live without it. Steak and baked potatoes, Sheppard’s pie, rib eye and mashed potatoes – you get the idea. Many cultures throughout the world use meat and potatoes in different ways in their cuisine (I’m partial to Finnish, Swedish and Floridian meat and potatoes). In this meat and potatoes space, Old School Death Metal is cheeseburgers and fries – beloved and overlooked – may not be the first choice but always hits the spot. The recent OSDM revival illustrates this well. Some people are over it saying the scene is saturated and half of the cheeseburgers out there are too generic and derivative, while others are always on the hunt for a new burger spot to satisfy that craving. Frozen Soul is that mouth watering, craving decimating, first choice new spot that ticks all of the boxes of what a perfect old school cheeseburger should be, while offering their own icy spices and accoutrements to keep you coming back. My point is “Crypt of Ice” makes me hungry.

Bad food analogies aside, Frozen Soul is a well-oiled Texas tank rumbling through everything in its path waving the flag of crushing Old School Death Metal. They are a fairly new band, having been around since 2018, with only one 2019 Maggot Stomp demo to their name. The band’s debut album,  “Crypt of Ice”, released on January 8th via Century Media. Funny to think of this album as a debut as these songs come across as the work of a crew of seasoned veterans. If Death Metal is your thing, please, for the love of Quorthon, do some neck stretches, you will need them this is some headbanging shit.

The title track starts with 46 seconds of ominous atmosphere before a quick riff leads to blasting. As soon as you get a taste for it, tempos change, you are introduced to a new slower riff, tempos change again, and the riffs keep coming. The last 45 seconds of the song is  a fun chugfest with a few well placed pinch harmonics. Thus the paradoxical nature of this riff-fest of an album begins to unfold: filthy and fun, relentless and comforting, familiar and new, coldly precise and warmly organic. Next up “Arctic Stranglehold” starts with a tremolo riff and I dig the d-beat that pops up occasionally on the track. Once again, memorable catchy riffs abound.

3 tracks from the “Encased in Ice” demo have been re-recorded for the debut. “Hand of Vengeance” starts off with a piano intro before showing us the tight execution and groove that earns the band their comparison to Coventry giants Bolt Thrower. The final minute of the song is 100% Frozen Soul though, just five friends chucking sonic icebergs onto unsuspecting listeners and innocent bystanders. Tucked between the other demo tracks, “Merciless” and “Encased in Ice”, “Wraith of Death” has one of my favorite riffs of the album. Matt’s rolling bass drum work on this track is quite effective and keeps the tank rolling through wood, stone, dirt and bone with a single purpose: for victory. It’s cool to hear these new versions of “Merciless” and “Encased in Ice”, especially the latter. Michael and Chris bring new life and new layers to the song that kicked things off for the band in 2019.

“Beat to Dust” shows the band’s growth and I hope I can see the band play this live on stage in the future. Close to the pit but not too close, this old metalhead has a shitty hip and bad knees. “Twist the Knife” is a banger. After a short intro Sam starts the song with a disgusting riff and putridly gorgeous bass tone that permeates the entire song. Speaking of Sam’s bass tone, I’d like to think that somewhere on the East Coast Dan Lilker is nodding approvingly. “Faceless Enemy” has a quick melody in the beginning that morphs into different riffs throughout the song until another breakdown chugs the listener into oblivion. “Gravedigger” displays some of the slower moments Frozen Soul has to offer and is an effective album closer. The song does 2 things for me: 1) it makes me want to immediately hit play again and 2) it keeps me excited for what the band will do on their sophomore release.

I keep mentioning the riffs mainly because this album as a whole resonated a lot with me. The riffs stand out to me because all facets of the band’s music work so well together. Chad’s vocals are deep, well enunciated, with the right amount of foggy reverb firmly sucking the listener into the “Crypt of Ice” itself. Michael’s and Chris’ guitars are razor sharp and blunt as hell. Sam’s bass brings the thunder, and Matt’s drumming serves the songs so well – a lot of the groove, and dare I say bounce, comes from the syncopation between riffs and bass drum. The mix and production serve the songs well. All instruments come through clearly in a pleasingly filthy way –  a shiny new tank cutting through the hills of a cold old forest, if you will.

I’m stiff as hell for a Brazilian dude and my people love to move. However, I am simply not built that way. To be honest with you, this album made me wish I was a bit more Brazilian in that regard simply because Crypt of Ice as a whole is so fun and groovy. I say this with the utmost respect, this shit is borderline danceable. This is an infectiously fun album that is the he result of strong conviction and unshakable resolve. Frozen Soul should be proud of their work, in a meat and potato world they’ve created a noteworthy cheeseburger and fries. I give this 5/5 tanks rolling in the tundra. (International Acrobat)