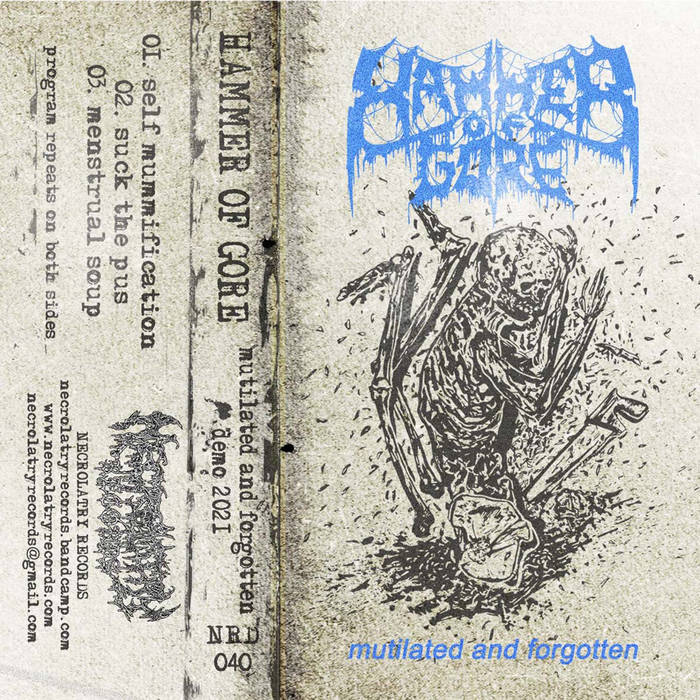 Though Hammer Of Gore might be a new band to many, they are around for quite some time already. They formed in 2009 as Infected, changed their name to Hammer Of Gore in 2010, released their self-released debut-album ‘Uglified’ in 2012 and folded a year later. But, blood seemed thicker as they resurrected the band again in 2020 and released a live tape in 2021 and recorded and digitally released this ‘Mutilated And Forgotten’-demo as well. Malaysian based Necrolatry Records decided to unleash this three-tracker on physical format earlier this year.

This German trio employs fairly simple Death Metal, with slow chugging riffs, mid-tempo drums and deep, fairly standard grunts. Not much special, you might say. Maybe that’s true too, but is that a big problem? Well no! It’s a nice listen and it tastes great. Take a listen to the second track, ‘Suck The Pus’, which has a nice and crisp acceleration. Fans of Swedish Death Metal, or of the new generation of bands that have raised that Swedish flag, like for instance the also German Revel In Flesh, can indulge themselves with Hammer Of Gore.

In short: a fine demo of a ditto band. I guess a full-length album will not be long in coming, although I have to say that I often prefer an EP of this kind of bands and music -anyway, Hammer Of Gore is a band to keep an eye on. (FelixS)