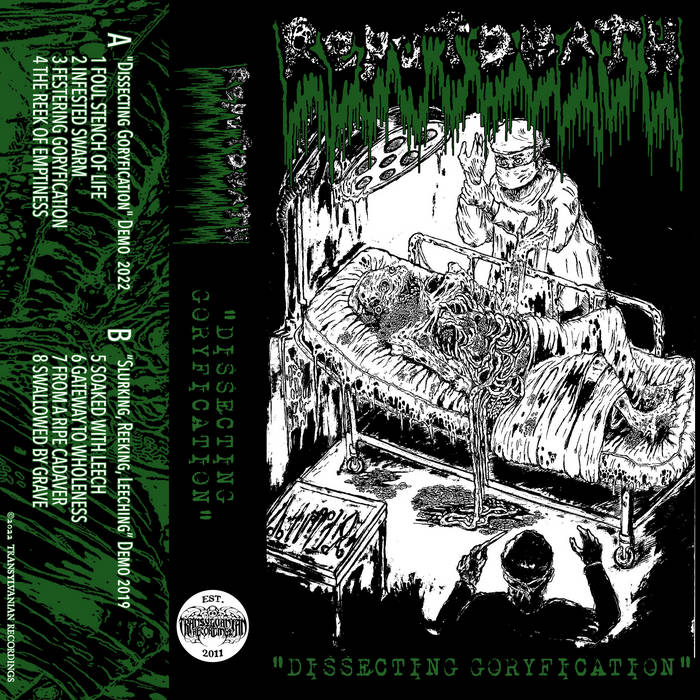 Have you ever wondered how Autopsy would sound like if they would record their albums in the famous Sunlight Studios? Well, Reputdeath could be the answer to that question.

“Dissecting Goryfication” has that typical Swedish buzzsaw sound combined with that slow Autopsy sloppiness. Even though these guys reside in Malaysia, these four tracks presented by Reputdeath are sounding exxxtremely familiar. Crunchy riffs, gurgling sewergrunts propelled by a soberly playing yet effective drummer. It feels a bit like coming home after a hard days work. Putting your feet up, pop open your first bottle of beer and let Reputdeath massage your earscales to an intense auditory orgasm. Aaargh….Yesss.

Anatomia’s Takashi Tanaka lends his festering vocal cords to “infesting swarm” which gives this song a more rancid edge than the other three tracks. No speedlimits have been broken, no technical boundaries have been pushed on this tape.

What you get to hear for twenty minutes is slow pounding old school Death Metal that feels as familiar as your grandmother’s unwashed armpits. (Franki_boi)