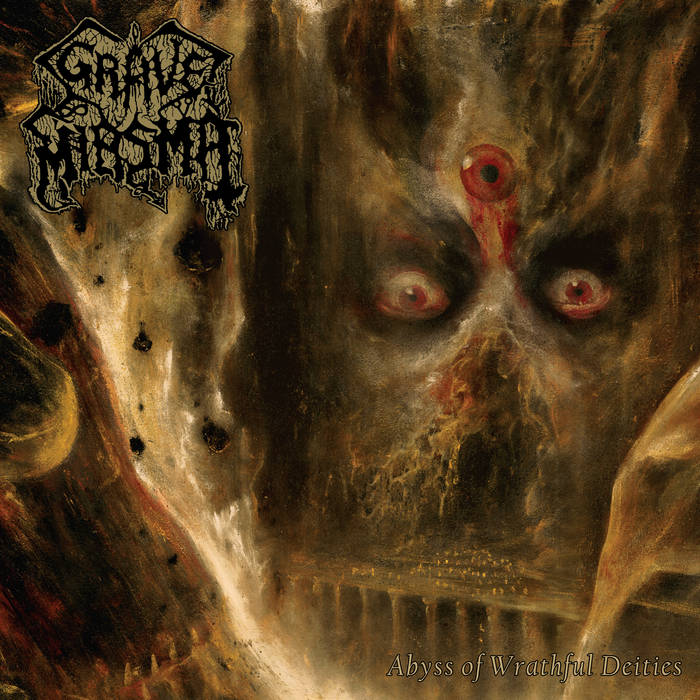 In the Death Metal scene of the recent years, one of the most revered bands definitely is UK’s Grave Miasma. Born as Goat Molestör in 2002, the band now has two decades behind it in which it has slowly but very steadily worked towards an outstanding reputation, where both quality recordings and intense live shows play a major role. The latest feat dates from last year, in which the band presented only its second full-length album with ‘Abyss Of Wrathful Deities’.

Grave Miasma is by no means a band that has to rely on big output, on the contrary. Grave Miasma always takes ample time to fine-tune their dark artistry to perfection. Such is the case with this second album, which follows up the monumental ‘Odori Sepulcrorum’ (Sepulchral Voice Records) eight years later. In the meantime, we were kept silent with the excellent ‘Endless Pilgrimage’ 12″ EP which was released in 2017. Although it is always a long wait for fans, that patience is always rewarded with downright stunning works of art, that are still hard to decipher even after many listens.

‘Abyss Of Wrathful Deities’ fits seamlessly into that tradition. It is yet another recording full of interesting details and ever-surprising depth. Ah, well… surprisingly? In fact, this follow-up is a logical musical continuation of all the work the band presented before. Just like any of the bands’ earlier works, the ultimate dark Death Metal that is surrounded with many Black Metal edges still demands a lot from you as a listener. The suffocating atmosphere is grabbing you by the throat and drags you down into the abyss. In fact, it is the musical equivalent of an exploration through the darkest chasms and caves to the centre of the earth, which would make even Jules Verne get sweaty armpits. The long songs take you past many tempo changes, screaming guitar leads and eerie vocals. That Grave Miasma does not make easy-listening Death Metal was of course already known, it’s not exactly Nunslaughter or the average Rogga Johansson band where everything is laid along the same bar and where you can sing along before you’ve even heard the song. That inscrutability is Grave Miasma’s strength, that adventurous and creative approach to the Death Metal genre has made the Brits a widely loved and celebrated band. But it is also exactly why it is a band to be ignored by some, it takes some perseverance and stamina to get to the bottom of everything and make the music your own. ‘Abyss Of Wrathful Deities’ is no exception in this, it is only after many listens that the true, dark, nature of the album emerges and unfolds its most brutal, black and all-consuming beauty.