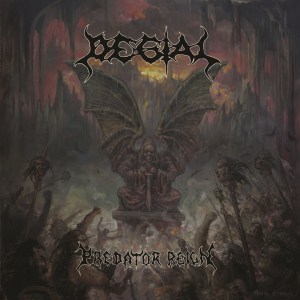 The new album from Degial is like a thunder that strikes you in the middle of the face…you know you want to hear some nice vibes from these crazy Swedish ghouls but what you will really hear is a marvellous dive into the 80’s craziness , riffs that seem to belong to the 1989 era of Morbid Angel. Well..you know what I am talking about. It doesn’t seem to be boring anyway, in the contest of 2018 era, its genius in its darkness unleashed. They know how to strike with those guitars and drumming. echoes of Death and Black Metal melting together in a glorious way. It’s like mixing some Watain cult together with Death Metal classic sounds and from the very depths of hatred you will see true evil rises! Hail Degial. that’s all! (Cris Pervertor)