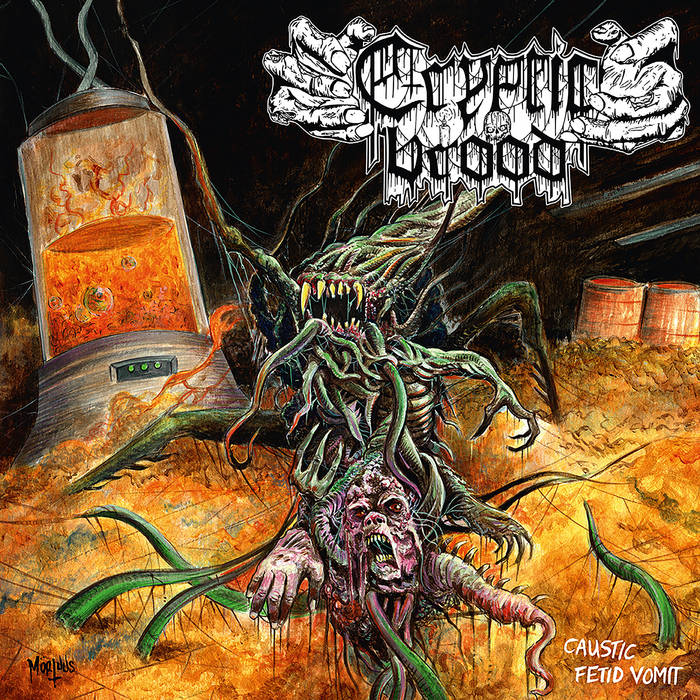 While Cryptic Brood by no means is the crème de la crème of todays Death Metal scene, I can’t help but having a soft spot for them. Their DIY-attitude and astounding work ethics are contagious and can only be applauded. With two full-length albums and about ten smaller releases, they are pretty prolific too. This ‘Caustic Fetid Vomit’ is the latest in a rather large series of EP’s.

Anyone familiar with the band will know what to expect from this German Death Metal trio. For those who (still) don’t: it is all back-to-basics Death Metal with Cryptic Brood. Think of Autopsy meets Autopsy. So basically, they fit straight into the seemingly endless stream of Autopsy-like bands of the past decade, such as Morbus Chron, Obliteration, Maim and the likes. Rather simple rocking riffs and galloping drums and vocals with a nice dose of a reverb-like effect. Not spectacularly great, but all the more charming.

This EP has been released through five different labels from all over the world, so it should be available to almost everyone. So, if you have a few bucks left, you should consider spending them on these guys and get yourself some decent and brutally honest Death Metal.