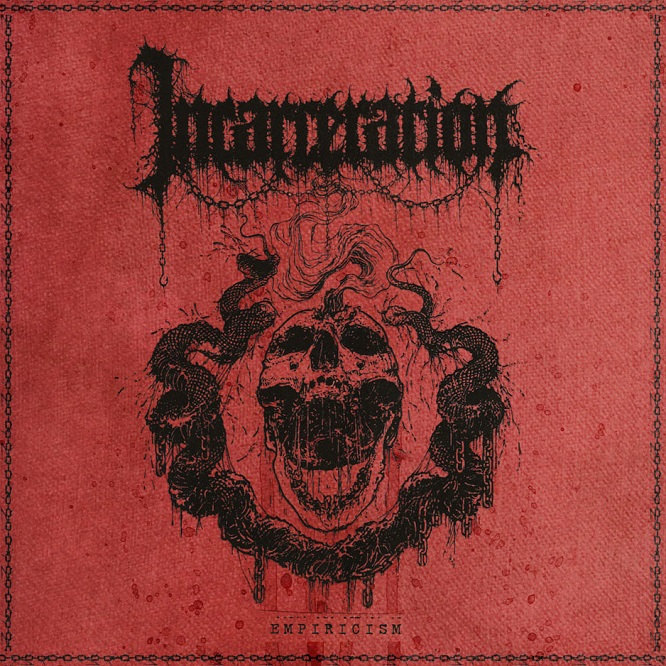 German-Brazilian metallers Incarceration, became a full-fledged band that returns with another new release with the EP “Empiricism”. Newly joined forces are Pedro Capaça (Violator) and Alex Obscured (Speedwhore) on guitars. And, it’s pissed off and mangy one, that recalls the production and approach to songwriting that is almost outlawed by today’s standards. The production level fits here like a fist on the face, and this can be said solidified their own sound, if we compared to the sound level on their EP “Sacrifice” or the debut “Catharsis”. Capaça and Alex, surely now turns them into a troop from fierce force. And the EP sounds like, created in a filthy basement hole on a 4-track device, which was the actually intention by these feral troop. No allowance of clean, modern, sterile productions, fully compressed and flawless. The distinctive, hysterically energetic vocals of front man Daniel Silva, spearhead the fast-paced, Death Thrash riffs like a gale force. Their tour history says, they appeared at festivals such as Party San (Ger), Killtown (Den) Obscene Extreme (Cz), Incubate (Hol) Siege of Limerick (Ire) and shared stages with Dead Congregation, Blaspherian, Unaussprechlichen Kulten, Escarnium. Just wondering, how bewildering and maddening they are as a force during live sets and no wonder, the spectator’s always received a tormenting and piercing treatment from them. Their killer death metal assault, must have remind the die-hards and other exposed of watching spectacles of bands like Repugnant, Repulsion, Sadistic Intent, Sadus, Dark Angel, and old Sepultura/Slayer in their prime days and nights.

This EP contains four songs and the opener “Chtonic Pulse”, immediately indicates the atmosphere awaits. “Psychic Totality” contains the old trademarks of the band, but seems much more complex.  And how fiery is the start of “Beneath the Chains of Existence”! So is the last song “Chasms of Metaflesh” that becomes a wrecking ball with speed but at the end sound almost a bit in the direction of Black Metal. As in, “Cthonic Pulse” the band shows how to pull the brakes in the middle of the song and skillfully incorporates doomy fading. Got to mention again about “Psychic Totality” and “Beneath the Chains of Existence”, which will keep inciting anyone for long, with their maddening mid-tempo stop and later, how fascinatingly the speed increased again in grind fashion, like an anachronistic stance.

Altogether this is 21 minute of old-school Death / Thrash, and surely the rawness achieved breaks with modern standards. The cover illustration was signed by Rodrigo Salvatierra, and each song has its own illustration by Jenglot Hitam. Daniel da Silva (vocals/bass) paints the lyrical context in one conversations that – ‘Empiricism, is about the wisdom acquired through this journey. The experience was now embraced as a hermetic yet boundless artistic challenge, and congregated to deliver that sonic visions. Drummer, Michael Koch elaborated that more deeply – ‘The concept of Empiricism deals with our personal journey towards the inevitable and all therein that may be explored. A catalyst from the depths of the sub consciousness. Through conquest and manifestation of the mind inside a dying vessel, we want to strengthen the passion and willpower in the here and now. It is a monumental fragment that reflects our pilgrimage into the nucleus of our individual existence.’

Surely these are not mere words, as the analog mixing and mastered resulting in their most natural and raw production thus expressed the inner-self of this record. And, inevitably the crude and most aggressive emanations of these compositions, purposely reflecting the rawness of existence. Incarceration, totally lit the moss grown path here with this new EP and it’s absolutely recommended for all the worshippers behold true underground essence. “Empiricism”, is now not out via CD, vinyl and cassette through Dawnbreed Records, Lycanthropic Chants, Deadly Throat Productions and Misanthropic Records. (Rocky Ghosh)