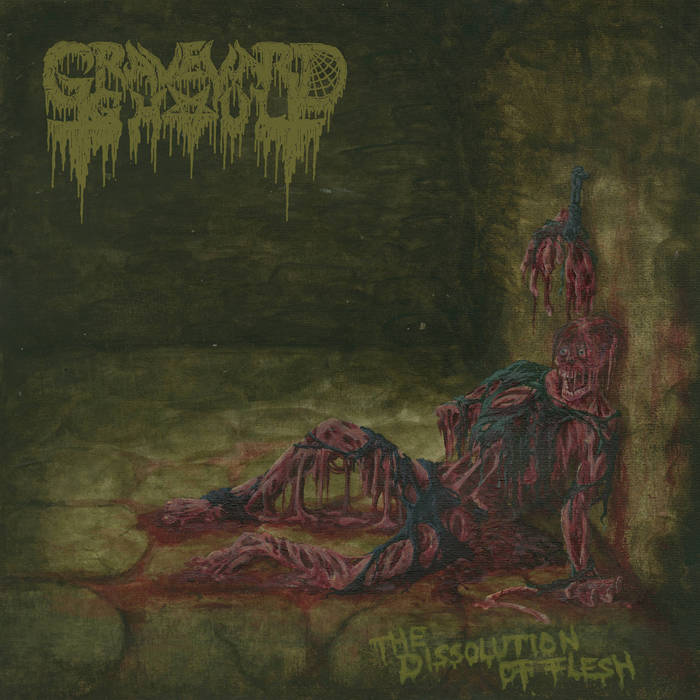 A bleak January night sky, soft rain pouring out of the grey clouds. Out of its clamp, muddy grave, a moldy Graveyard Ghoul crawls into the dreary night. With its alcohol soaked eyes it spots me and slaps me on my hairy naked butt cheeks with its rotten Death Metal. Hit me baby one more time. I like it when Graveyard Ghoul slaps me on the butt and Lycanthropic Chants did a great job signing up these inflammatory Ghouls.

Spreading its disease out of Oldenburg (Germany) Graveyard Ghoul infects my earcups with its smelly, stinky Death Metal. Opener “Stack the Graves” immediately nails it girls. A slow start, some doomy riffs, impeccable grainy sound, yet after a minute or so, a Black Sabbath swing sets my unshaven head in motion. A short and feisty track! …Oooh yeah little sissies, another freaky skull worm: “Fill the emptiness with Dead Ones”. Fantastic song title. Whenever my wife and i decide to have a sixth child we will name it “Fill the emptiness with Dead Ones”. To please the grandparents as a matter of speaking, ‘coz my youngest daughter is called “Hammer smashed Face” and they are not too pleased with that name,… too much syllables. To cut the crap, “Fill the emptiness with Dead Ones” really sets the tone. A swinging, groovy start, some mid paced old school Death Metal thumping, yet after another two minutes the song suffers from a cardiac arrest and slows down almost to a complete stop. Only the bass guitar keeps buzzing in the background, short drum intermezzo and the shit hits the fan again. Great songwriting guys.

These guys own the fingerspitzengefühl to write some decent, catchy Death Metal tunes. It doesn’t set new speed records, it isn’t the most rancid sound I ever stumbled upon, it’s Death Metal you listen too in the car while trying to hit your neighbours smelly cat or that annoyingly barking Jack Russel.