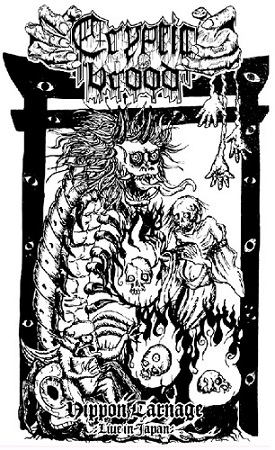 Different split albums have seen the light where Cryptic Brood offers a taste of their Death/Doom alongside other bands like Minenfeld , Anatomia and others, while only two full-length albums were released in their history (they’ve been active since 2013).

Now they have recorded a live-album titled “Nippon Carnage”, live from the land of the rising sun Japan. They start off with Arigatou to thank the audience before they play two parts of their music. First one is titled “Brain Eater” where all tracks from their debut full-length are played. The other half is titled “Oldschool”, where – the name mentions itself – only old school tracks from their beginning are on the setlist.

Overall seen it’s a more then decent release, and the live-performance is registered very well on tape, so if you’re a fan of this band, this is a more than welcome addition to your collection. Give this one a spin “until it starts to rot” (greatest song on this live performance for me)! (Fredde)