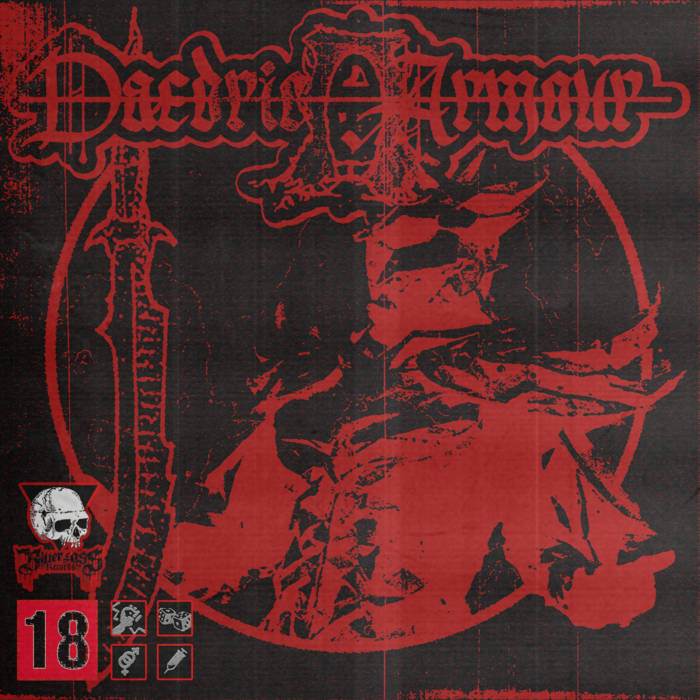 “Daedric Armour is the only true Elder Scrolls worship in the form of savagely fast and raw black metal.”

Wait! “Google is your friend”, they say: ‘The Elder Scrolls is a series of computer role-playing games developed by Bethesda Softworks’.

What? A computer game? Are you serious…

The only video-games I played were the ones of the early 90’s, so I am a complete n00b into the world of gaming. I always thought of the computer game industry to be a bit too nerdish to find its way into metal. But seemingly, it did. Usually I really like doing some research to understand the backgrounds and motives of the band, but this time I really can’t be arsed to do so, sorry.

Musically, this is not so bad. Fortunately, this foursome from Australia has, besides playing computer games, found time to work together on this debut album. Their brand of Black Metal is quite ingenious, it has a lot of dynamics and halfway it even has a piece that is quite mathematical. The dynamics are mainly shaped by the drums, which change tempos regularly, but mostly are on the fast side. The fierce guitar sound and good playing of guitarist Elijah Lee should not go unmentioned either, he turns out to be quite capable of beating his guitar and squeezing out catchy riffs and good leads. The many melodies and crafty rhythm changes make the whole a colourful and daring experience. Elijah also takes care of the vocals that sound equally intense and fiery. I assume that the inserted samples come from the video game, in my opinion they do not add much and takes out the momentum. I may not have anything to do with gaming, the source of inspiration of the music has in any case ensured that ‘Daedric Armour’ has become a fine debut album.