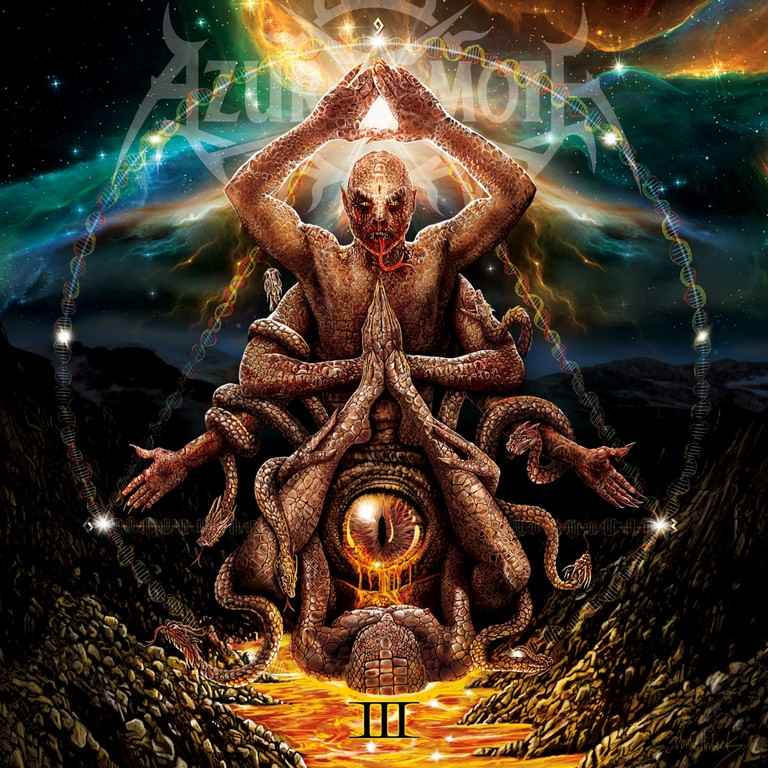 So, I should, logically, start my review off by categorizing the band into a genre, right? Well, Azure Emote, intentionally blind to all those genre limitations, called their work Misanthropic Avant-Garde Death Metal. Interested yet? That’s only the start. The outlet you might know by its very active creator Mike Hubrovcak and previous full-lengths “Chronicles of an Aging Mammal” and “The Gravity of Impermanence” is something else! (On that note, props to Azure Emote for not throwing the lately overused term ‘Progressive’ around, even though they are – but not for the sake of progressiveness but an honest and true creative expression.)

Bearing a distinct sound I won’t literally compare to other bands (because I’d be lying if I did so, there may not be anything like this in the scene), these guys radiate creative energy similar to that of Atheist or Devin, similarly are fun as Thy Catafalque, journey-like adventurous in songwriting like Shylmagoghnar, and at times reach a Car Bomb level of sonic schizophrenia. After a seven-year creative hiatus, they are back with “The Third Perspective”, their third full-length. And we cannot blame them for taking the said hiatus: Mike was also dealing with other projects and made sure Azure Emote continued to give us quality over quantity.

Bold from the very start, you know this record is definitely not here to deliver the same overused riffs and patterns you’ve been hearing for the past 30 years. Basing their work around instrumental and rhythmical techniques that shape Extreme Metal, these guys heavily top that up with constant yet unexpected anomalies of all kinds. Seriously, I cannot even name all the instruments they use without looking it up. Not a single dull moment, definitely. How could there be if every second was an all-new explosion of creativity?

The six songs are individually great, my personal favourite being “Three Six Nine”, but maybe not the most consistent in terms of an album. However, every song has its own character it maintains from start to finish, even if it lasts for 10 minutes, which is a lot for this level of detail in music not to lose its initial feeling. If you heard their earlier work, you’ll notice the progress in perfecting their songwriting formula from making weird complex sounds to the flowy and interconnected abstraction it is today. Very interested to hear what the next step will be.

And if you’re simply the “tl;dr” type  – too long; didn’t read – take a look at this record’s cool artwork, that’s exactly what it sounds like! (Lana)