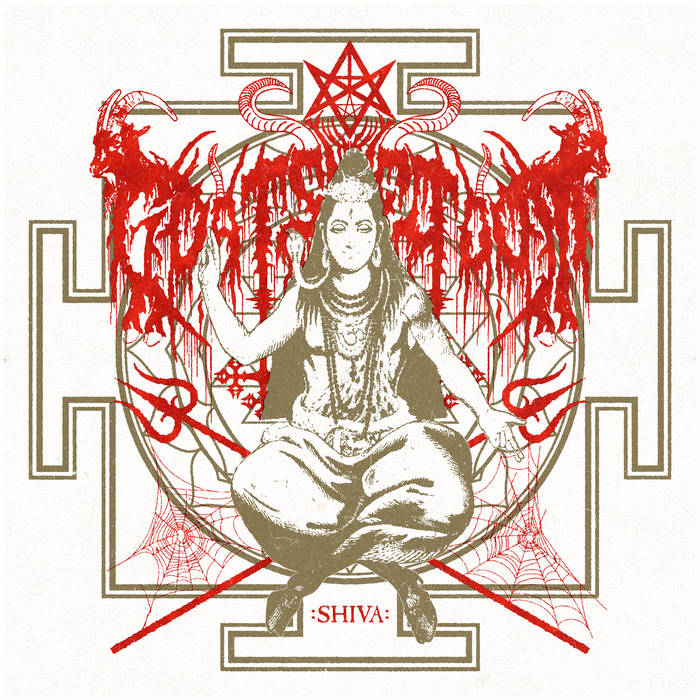 Aleister Crowley once remarked that the whole and sole object of all true magical and mystical training is to become free from every kind of limitation. While there holds truth to the statement, I’ve always found that a certain mysticism can be discovered within the crux of Black Metal, for it is a genre that possesses a spirit that transcends the mind, becoming a voyager upon stygian shores. In other words, the very composition of the genre is imbued with an essence so ineffable that it can be looked upon as an esoteric link which bridges beyond the invisible. As preposterous as these words may seem, I truly believe that once a soul finds a creation forged from the most honest emotions, that which is fashioned now becomes a vessel for another’s conspicuousness to merge with, to experience such rituals carved in sound.

“Shiva” by Goats of Doom calls upon the transcendental aura which flows within the realms of Black Metal, and from this energy extracted, a spell etched in sound is woven from its tenebrific spirit. However, the meritorious experience arrives naught from its ability to call upon the void and shape it to its very image, rather it is beauty found within its tendrils of melodies, where the notes that are expelled are enough to coalesce with the listener’s mind and ignites the flames that wishes to be free, a fire that yearns to dance to the feral and primitive beat of one’s inhibition.

For the language in which the atmosphere takes form comes from the conjugation of the vocals and strings, for together they evoke a serpentine ambience to its incantation, tracks such “ἀπōκάλυ” and “Armon varjot” exhibit a symbiosis where the tongue of these offerings merges itself into the meandering melodies, whereby the energies dispelled from each instrument accentuates the ceremonial aura. The nature of these songs, especially the manner in which they bleed into each other creates an alluring quality to the album as a whole,for it blurs the line of just becoming a musical piece, instead it fosters the illusion that you actually partaking in this offering as you gaze upon the altar and drink upon the sounds that flows in ecstasy.

Goats of Doom has conjured forth an arcane spell whose energy is enough to entrance a soul with its Intoxicating rhythms, for its musical candor can be likened to one who presses the chalice against their lips, and from the nectar that is ingested, a feverish feeling takes ahold as the carnal essence of a soul’s desires becomes much more prevalent. The hymns of “Shiva” guides the listener upon a path where melodies becomes the zenith in which a wandering soul yearns to discover.