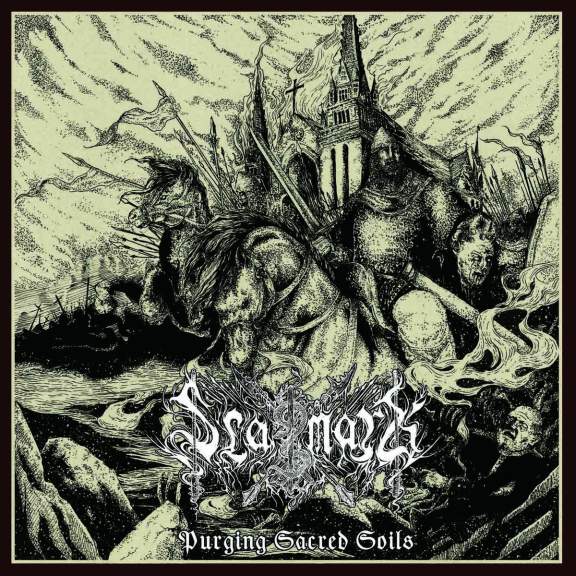 German Black Metal duo Slagmark went about the start of the bands career in a back to front manner, releasing their debut album followed shortly afterwards by a demo release. This review will focus on the album, entitled ‘Purging Sacred Soils’ which has been released through Worship Tapes and Purity Through Fire. Commencement of the album is through the choral chanting vocals of ‘Hexenhammer’, an eerie and melodic prelude that in no way reveals the true purpose of the first song proper, ‘Feeding the Urge to Destroy’.  Vertiginous wintry guitar leads and unceasing volleys of drum tones and blast-beats are the order of the day, whilst the vocal work leans to the harrowing, tormented side of the spectrum. Through into the title track with no decline in either velocity nor antagonism, the album is transported forward through spite and resentment until finally the up until now ceaseless aural damnation finally relents for a haunting synth interlude to begin ‘Built on Bone Hills. Tis but a brief respite however, as once more the rigorous and all-encompassing guitar lead melodies and thundering drumming once more sound out in fury whilst the anguished shrieks once more take up their diatribe. This track does however mark a slight shift in focus for Slagmark who, whilst never really wavering from their unbridled hostility, do allow for more dulcet synth tones to rise briefly to the dark surface in places.

Slagmark peddle very straight forward orthodox Black Metal, but they do so with great style, with a harshness of drum tone and a hungry, driven yearning from the guitar leads. Due to this, ‘Purging Sacred Soils’ is a strong, dependable listen and a substantial debut offering from this German Black Metal horde. (Luke Hayhurst)