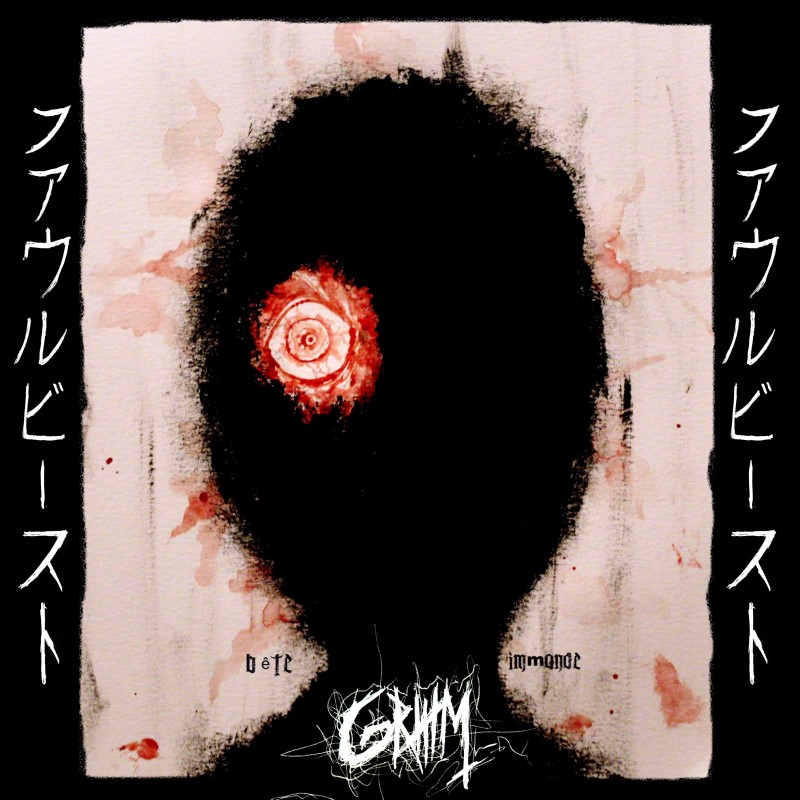 And indeed: his previous album, “Pope Art”, demonstrated a myriad of very eccentric musical influences. A rollercoaster filled with the most outrageous musical gadgets.

The new one, “Bête Immonde” (Foul Beast) is however more introvert in nature. So let us proceed.

The album opens, surprisingly, with another reference to Charles Manson and serves as an almost 4 minute long intro which ends with chanting a chain gang prisoners. Rather odd, since the last K.F.R album ended with a hallucinatory piece of music around Charles Manson, including a butchered, vulgar rendition of a Beethoven symphony.

But this isn’t K.F.R. – this is Griiim: the drums are different than on his other projects. The pace is mostly slow and relaxed but steady, the eerie synths are omnipresent, but do not serve as a tapestry like they do on the K.F.R. albums. They just set the mood and colour the tracks.

Vocal-wise, Griiim is less acrobatic and far less necro than his other project. Maxime sounds like a heavily sedated psychiatric patient, vocals reduced to a feral gnarl, but remaining very disturbing nonetheless. There’s a lot more guitars on this Griiim album, pushing it into a Black Metal direction. And as for the synths – I can’t shake the feeling that they keep reminding me of those creepy elusive sounds on the “My Angel / Morax” EP (1991) from Arcturus.

“Nymphe décharnée” (emaciated nymph ) is the first real track, with fuzzy guitars and earlier mentioned synths. As the tone of the synths change, so does the song, ending stylish with tympani. We plunge back to the southern states of the U.S. with the chanting of a chain gang: a group of prisoners chained together to perform menial or physically challenging work as a form of punishment. “MMXIX Do You Remember?” Maxime’s coarse vocals intertwine with the chanting until the song morphs into a blissful atmosphere, with a subdued Maxime heralding the horrors of imprisonment and eventually revolving back to the chanting with guitars and all. Uncanny. Penal labour remains a controversial topic in the U.S., by the way.

Title track, “Bête Immonde” is by far thé most Black Metal oriented track, because of its guitars. I am not going spoil the surprise by describing each and every song in detail, but let us say there’s plenty going on in each composition.

“Bête Immonde” isn’t an easy album. One has to listen to it several times in order to absorb the entire gist of the album and it does grow on you. Unfortunately, I also cannot give it a maximum score, given the fact that there are too many stylistic references to K.F.R. The long vocals/monologues for instance.

People who are into the necrotic insanity of K.F.R. and hooked on serotonin (wink) will undoubtedly like this one.

Maybe Monsieur Taccardi can shed some light on his different projects in a short interview? It’s always worth trying… (LCF)