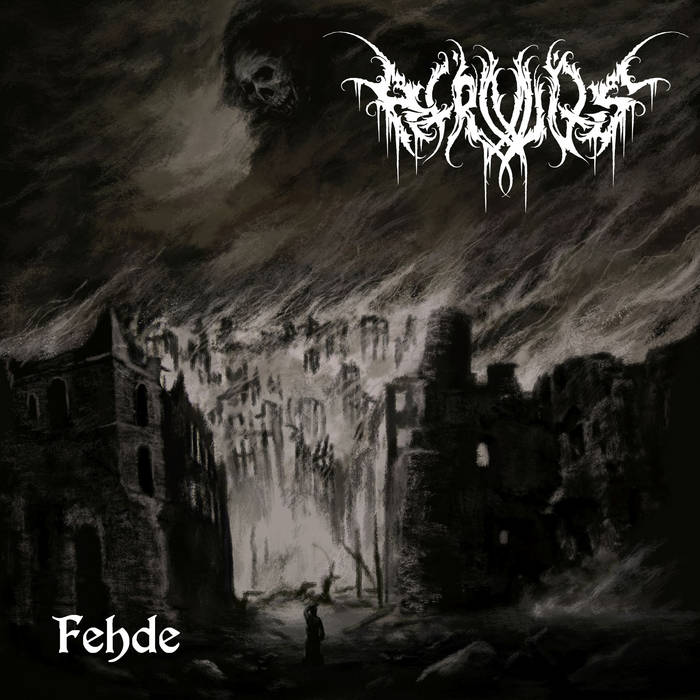 Hailing from the Saxony region of Germany, Atronos is a new Black Metal duo whose debut album entitled ‘Fehde’ (Feud) has been released on CD and CD Digipack by Purity Through Fire. The cover art for this release is superb, as Death looks down on a town as it is engulfed in fire and turns into a raging inferno.

I was rather surprised on hearing this album for the first time, as it has a remarkably upbeat and chipper disposition for a ruthlessly fast and uncompromising Black Metal album. The guitar rhythms especially during opening track ‘Mit Speeren und Harpunen’ (With spear and harpoon in case you couldn’t guess) are almost mockingly rambunctious and high spirited, and despite the grimmest intentions of the unrelenting drums, the guttural sing-song vocals and jaunty blackened riffs are really rather fun. I am of course jesting a little, but the high spirited tone of this album continues into ‘Ohne Gestern, ohne Morgen’ (Without yesterday, without tomorrow) and beyond into the albums middle and latter stages, and puts me in mind a little bit of Dutch band Heidevolk, albeit with a far more punishing drumming display and thundering guitar tones.

I’d say that ‘Fehde’ is as close to Folk style Black Metal as you can get without the extra instrumentation or cheesy antics. This is an album that carries with it a feeling of an old fashioned storybook, filled with twisted and grim fables. In this case, the stories are being relayed via musical output, and Atronos excel at creating an aura of German epics. Very pagan sounding but without all of the accoutrements. ‘Fehde’ is a very thought provoking and mentally engaging album, complete with creative song craft and harsh German musicianship. I can’t recommend this one highly enough if you like 90’s style Pagan Black Metal with a sharp, crisp sound and a powerful flowing ambiance.