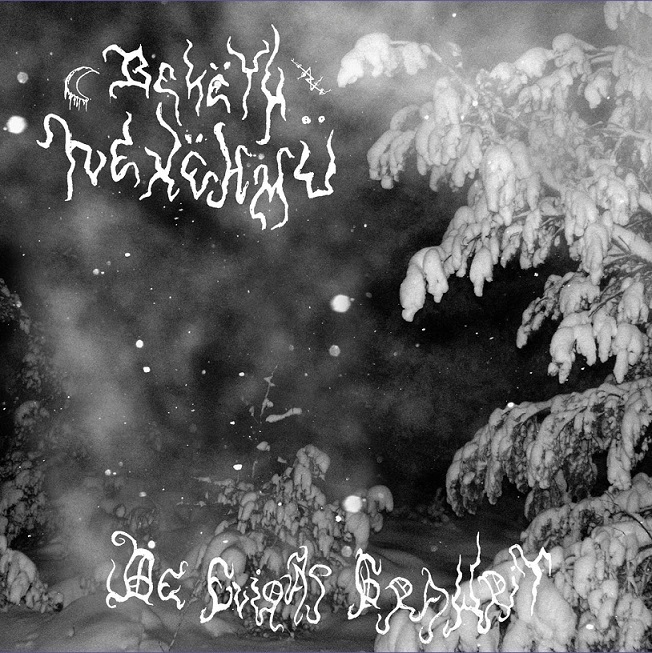 The full-length albums of Swedish Black Metal act Bekëth Nexëhmü follow each other in rapid succession. Just after the previous work, the one filled with mostly old demo material, ‘De Fornas Likgaldrar (Forna Nordiska Besvärjelser Omfamnat I Tre Kapitel)’, has only just cooled down or Swartadauþuz is already bringing forth the next one. That previous album was quite monumental with its two hours, and although this one is a lot shorter, with just under an hour it can still be called a bulky work. The future of Bekëth Nexëhmü is otherwise somewhat unclear, and for a while it seemed that Swartadauþuz would bury his project. Incidentally, not before he would still treat us to no less than four new albums, of which this is the second, but whether this musical vehicle is now indeed dead and buried is far from clear. Anyway, we’ll sit back and relax for “De Evigas Gravrit” as well…

Musically ‘De Evigas Gravrit’ definitely seems the odd one out in the rather extensive Bekëth Nexëhmü discography. While the trademark Bekëth Nexëhmü sound is best described as rather, depending on your point of reference, long drawn out tracks, with melodies forging impressive soundscapes and a raw production to enhance the overall ambience, these sound distinctly different. The older material all had a certain emotional touch, but on ‘De Evigas Gravrit’ Swartadauþuz pushed this to a new level, uncharted territories even. The music has a much more melancholic feel, I wouldn’t call it ‘depressive’ in the sense of that term is used to denote certain bands, but it definitely has a more gloomy and desolate ambience. That is partly due to a slightly different guitar tone that tends to have a rather piercing character, but mostly because of the tempo that is remarkably slower than anything the band released before.

This all kind of came out leftfield, not being quite prepared for such a different twist in the familiar Bekëth Nexëhmü sound, this really needed a bit of extra time to sink in. And to be downright honest, I am not completely sure whether this experiment is all that successful. There is no real argument to really write it off, but because the tempo is predominantly low it tends to be rather one-dimensional and flat sounding. It is not all that easy to sit through this for that full-hour-playing time, at least, not with full focus.

With two albums down and two more to go, I am not truly convinced that Bekëth Nexëhmü is going out with a bang, if that was Swartadauþuz’ intention. I already made a statement in the review for the previous album that maybe a more critical ear is required, personally I think that discarding some material (or projects, for that matter) might be a good idea: keeping the focus on quality, rather than quantity. While this might sound harsher than I meant it ‘De Evigas Gravrit’ certainly has some great moments, it also it leaves me with a bit of a double feeling.