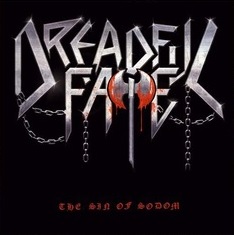 Thrash/Death metal created in Sweden by four guys with nicknames as Total Destruction, Corpse Skelethor, Death Ripper and Bestial…are you triggered yet? Furious thrash metal is what I’ve heard and the two tracks and additional cover track ‘Tormentor’ from Kreator are fun to listen at. The tempo goes full speed and the aggressive vocals do the rest on this demo. Perhaps I have to disappoint some people, cause there’s not really death metal involved in this demo for me personally. The raw production makes this truly old school, so fans of bands like Sodom, Kreator and Destruction in their beginning with a more filthy edge and darkness will enjoy this one for sure. This demo is great and the first step has been taken, so I at least expect the same level in the future from Dreadful Fate! (Fredde)