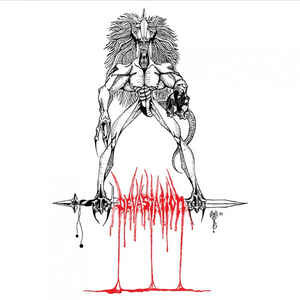 Since their split up in 1987 – also the year where their last effort titled “Dispensible Bloodshed” was released – there appeared already three compilation albums from these Americans. This time VIC Records gave it a go with this compilation with songs from both demo’s and their EP. Underground Death/Thrash metal at its best, and also – if I have to believe the internet – with one of the first singers that used grunts/growls named Troy Dixler.

Everything sounds so raw and took me back to the old days when I first heard old school death metal from the underground scene. If you want a fully cleaned up modern sound, well, they you’re on the wrong page here. Everything breaths old and especially sounds filthy and messed up. The guitar solos are grim and rotten, the vocals spit hell and the drums are over-energetic. Even the album cover says enough.

You have to ask yourself one question: do I like the raw unpolished underground Death Metal sound? If it’s a not, then get the hell out. The cult will stay alive as long as labels bring those old school gems back to life! (Fredde)