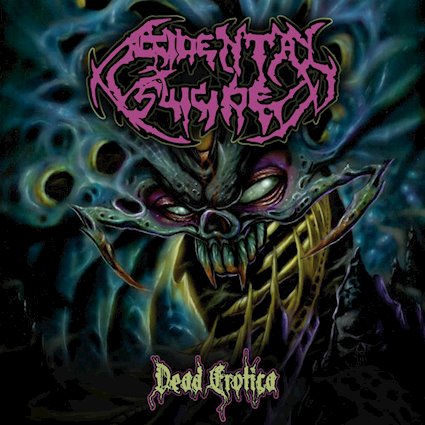 If Accidental Suicide from the USA rings a bell, you probably own their “Deceased” release which Deaf Records released back in 1992. Or maybe one of their demos “Flesh Parade” and “Sadistic Intentions”. A nice blend of Old School Death Metal and hints of Doom Metal which was a pleasant listen if you’re into old Paradise Lost and Autopsy. They recorded an EP called “Dead Erotica” right after “Deceased” but it never saw daylight. Until VIC Records got their hands on the master tape and released it alongside the 2 demos. Let start with the actual “Dead Erotica” EP, which is quite different comparing it with all their other releases. More experimental, complex and progressive and also adding some vocal effects. The basis is still Death/Doom but with a lot of twists this time. Can’t say this version of Accidental Suicide sounds appealing to me as the twists doesn’t sound like a whole, but more like several ideas just pasted after one another. Fortunately for me the 2 demos are included as well, which are more charming if you ask me. The “Flesh Parade” (1990) is the typical demo before the debut full-length as it has the same style, while “Sadistic Intentions” (1989) is quite faster and more Thrash-like with howling solos. This compilation definitely shows the different faces of Accidental Suicide. (Ricardo)