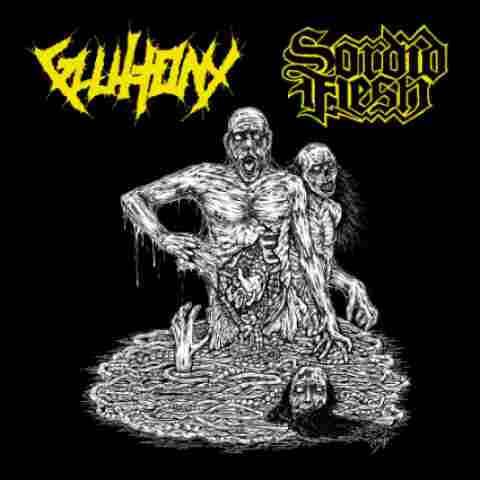 Vic Records is the label behind the split release between Gluttony and Sordid Flesh. Coming both from Sweden, their death metal sound is completely different from one another. Gluttony is not ashamed to show their Dismember influences, incorporating every single detail of the typical buzzsaw death metal sound into theirs. They’re responsible for the split’s first six tracks, each one with a similar duration and feeling. Gluttony has been around since 2009 and, prior to this split with Sordid Flesh, they have three more releases: “Coffinborn” (demo – 2012), “Eaten Alive” (EP – 2013) and “Beyond the Veil of Flesh” (full length – 2014). Sordid Flesh signs the last five tracks of the split CD. The band was formed in 2011 and are responsible for a couple of prior releases: 2011’s “Sordid Flesh” demo and the 2013 full length, “Torturer”. They have a different and more melodic approach to their sound, when compared to Gluttony. The songs are good but could use a little more variation into it. Nevertheless, it is a satisfactory presentation and fits well on the split release. (Antonio)