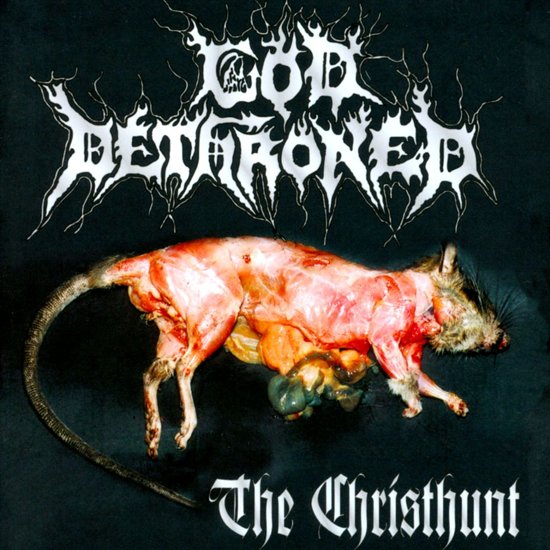 Before God Dethroned gained worldwide fame with their brilliant ‘The Grand Grimoire’ and ‘Bloody Blasphemy’ albums in the second half of the 90’s, for which they toured around the globe, the band recorded the criminally overlooked ‘The Christhunt’. Originally released on the German Shark Records label, a label that had a questionable reputation for lousy promotion and distribution, amongst other things. That resulted in disappointing sales for many of their releases, something that fellow countrymen Thanatos but also Sepultura (for their ‘Schizophrenia’-album) complained about. And so did God Dethroned.

Whether only Shark Records was to blame is hard to say. Originally released in 1992, the absolute peak of worldwide Death Metal frenzy, standing out of the crowd wasn’t an easy task to begin with. But one thing is for sure, it wasn’t because of the music.

Whatever reason, ‘The Christhunt’ remained a rather well guarded secret. A nice little gem from the early Dutch Death Metal scene. On later albums God Dethroned flourished in a sophisticated mishmash of Death- and Black Metal with lots of well-played melodic leads and atmospheric (keyboard) passages. How different is this on ‘The Christhunt’, which is an honest slab of primitive, straight forward, pummelling Death Metal. Not much unlike some of their peers from that same timeframe, like Gorefest (‘Mindloss’) and early Sinister and Asphyx (for the doomier/slower passages). It has that instantly recognizable dynamic early 90’s song structures, going from extremely fast blast beat attacks to slower parts, pretty unsubtle but so charming at the same time. The occasional use of keyboards (which reminds of early Amorphis), the Slayer-esque solo’s, the reverb-drench vocals and the rather dry production adds to that early 90’s feel and makes the album fit just perfectly within the local Dutch scene. And although this is miles away from their later work, ‘Infernal Sights Of A Bloody Dawn (Morbid Rites)’ already gives a hint of what was yet to come: an atmospheric song that is basically not that much different from anything heard on ‘The Grand Grimoire’.

Though ‘The Christhunt’ has been released on a picture disc in the year 2000, by Vinyl Collectors (a Hammerheart Records-sublabel), this is the very first proper vinyl edition. A much deserved reissue, as this album represents the early steps of what became one of The Netherlands’ most iconic extreme metal bands and simply because it is a Death Metal sledgehammer that deserves to be preserved. Only thing is that this is a missed opportunity to make this a double LP by adding the other old recordings (like they were released on the ‘The Ancient Ones’ compilation). And, with the risk of sounding all too sour, but for (dethroned) god’s sake: this hideous artwork, come on! (FelixS)