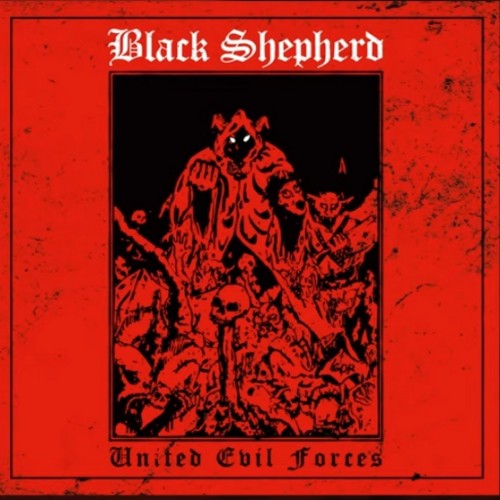 There is a possibility you have missed Black Shepherd, a Thrash Metal band from Belgium which was active in the 80s. VIC Records got their hands on the “United Evil Forces” demo, which saw the light in 1986, and restored and remastered it. They also added the rehearsal demo of 1985 and live recordings of a gig in Gemmenich in the beginning of 1987. After this demo they got a record deal with Punk Etc. and released their debut LP “Immortal Aggression” in 1988. One demo called “Welcome” further and Black Shepherd became ancient history.

You can throw in a bunch of the then-known Extreme Metal scene in a bucket and shake it, cause you will all hear it in the demo and the rehearsal. Be it the drum sound and fills of Necrodreath, the rockin’ groove of Venom…you will even hear the famous “Countess Bathory” riff during the rehearsal track “Animal” or just easily make the mistake to scream “Black Metal” instead of “Black Shepherd” during the same titled track’s chorus. To top it off, very old Slayer, Kreator even some Metallica’s “Kill ‘em All” can be noticed, as well as Sepultura’s “Bestial Devastation”.

Fun to hear and recognize the influences, but is not mandatory in any way. (Ricardo)