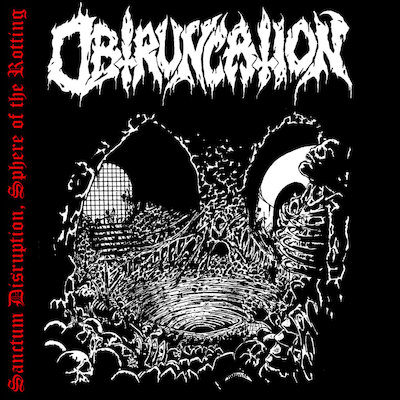 During the late 80s and early 90s basements, garages and community centers were filled with young enthusiasts, wanting to play the same music they have just bought or dubbed. Same happened with Obtruncation from The Netherlands, who started as Malfeidor in 1989.

On this compilation you can hear their “Sanctum’s Disruption” demo (1991) and “Sphere of the Rotting” demo (1992), you will hear the second demo first, and is filled with typical Death Metal from that era, the US kind. A bit like the first demo of Broken Hope to give you an example. The sound on the demos is restored, remixed and remastered but it remains having the demo spirit of the early 90s.

It goes too far to call it a hidden gem or two demos everyone was talking about, but like many of these kind of re-releases or compilation, it brings you back to the dubbed cassettes and Xeroxed covers times, and most of those trips are enjoyable ones. (Ricardo)