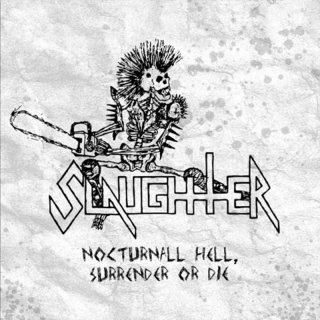 Canadian cult extreme Death/Thrash band Slaughter is still essential with their “Strappado” release till this very day. This time VIC Records released a compilation that beholds the “Nocturnal Hell” 7” (1986) and the “Surrender or Die” demo (1985). The only difference with the original demo is the absence of the Hellhammer cover “Massacra”. Probably there is a good reason to left that one out, but for me the reason is unknown. Of course everything is remastered, the “Surrender or Die” tracks by Dave Hewson himself, but it still has that demo tape vibe. Mid 1980s Punkish extreme Death/Thrash Metal galore! Ugh!