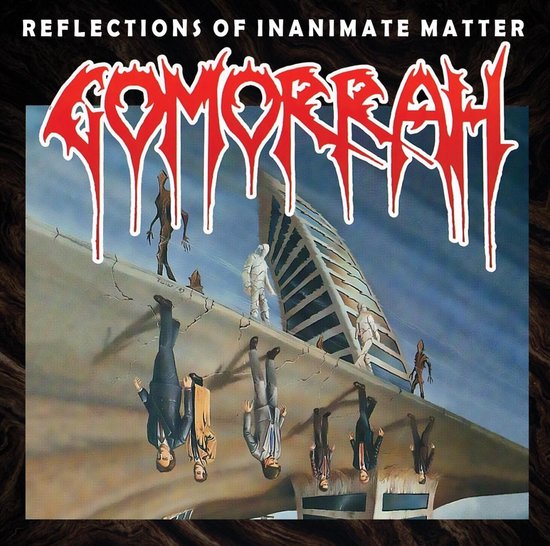 VIC Records now can be said a warehouse, to rediscover forgotten treasures. This time, they unearthed “Reflections of Inanimate Matter”, which was released by English Death Doom band Gomorrah in 1994. The era can be said the heydays of Death Metal.

So, to whom they are unheard of, may expect a raw, vicious, or deadly groovy style of Death Metal in the vein of Benediction and Bolt Thrower. But, actually there lay awaits the surprise for them. As this disc beholds the kind of Death Metal where double-bass-riddled guitar sound with gut shouts was the priority and where drums are toned down from super-blast fest to a more controlled injection of speed and the string players uncover diversity. The hook preliminarily comes first with the strange artwork and then with the seven very well-produced songs here, exude a freshness that is rarely found in the supposedly spontaneous crossover bands.

So, as soon as you throw “Reflections Of Inanimate Matter” into the system, you will be immediately transported back to a time when the essence of extreme was not without perception like present days. That’s evident on the third track “Sewer-Cide”, and notice that Death Metal can do without blast attacks, still sounds wicked, aggressive, and remain arresting. The vocals mostly consist of growls with a little echo, the exception is the seventh song, “Human Trophies”, in which Fish (ex-Marillion) contributed guest vocals, and singer Olafsen then growls afterward.

Deep into the record, “Hidden Life”, “Without Trace”, “Another Bleak Horizon”, “Rejoice In Flames”, all essentially bears the testament that “Reflections of Inanimate Matter” is a no-frills, no-gimmick, solid slab of Death Metal and now have been given new life through this remastered reissue. Having said that, although Gomorrah was a rather short-lived band, but anyone exposing to this record will remember them from time to time and might return often to experience its inanimate matters. (Rocky Ghosh)