Pestilence – Presence of the Pest 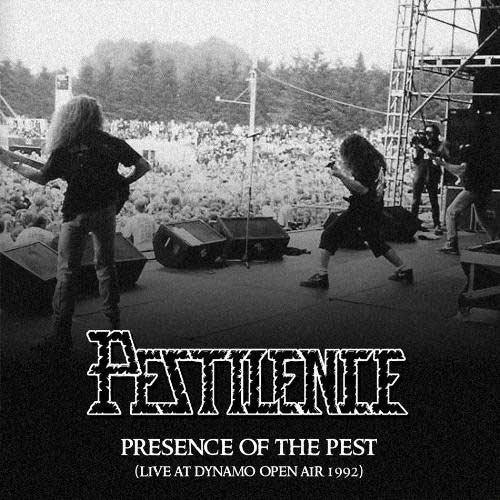 Which self-respected Death Metal fan doesn’t know the Dutch scene? Asphyx, Gorefest, Sinister, Thanatos, Sempiternal Deathreign and the list goes on and on. Sure, maybe I’m a bit biased as I’m Dutch myself, but I mentioned before…for a fuckin’ small country we have bands and releases that are respected all over the world. Which is something to be proud of. Funny enough we Dutchmen are very critical towards our own scene…but I think I had this rant before, so not really a good idea to start it all over again. Back to the Dutch scene; we also have Pestilence! Lots of stories, rumours and anecdotes about the band and the band members are being told throughout the years, which aren’t all that positive, but the albums “Malleus Maleficarum”, “Consuming Impulse” and “Testimony of the Ancients” are pure classicks for many. It seems mr. Pestilence himself, Patrick Mameli, dived into his archives and found the complete registration of the Dynamo Open Air ’92 gig in Eindhoven, The Netherlands. If you have several Pestilence albums on the shelve, maybe you have the “Mind Reflections” compilation, which was released back in 1994. Several tracks of the Dynamo performance, 6 to be precise, can be heard on that album as well. As I have that compilation, I was already familiar with half of the Dynamo ’92 content of “Presence of the Pest”, although this album is remastered. This gig was a year after “Testimony of the Ancients” got released, so the majority of the set list contains of “Testimony…”-material like “Twisted Truth”, “Lost Souls” and “Stigmatized”. Of course “Consuming Impulse” gets attention as well with “Out of the Body”, “Dehydrated” and “Chronic Infection”. Unfortunately “Malleus Maleficarum” part is present with “Chemo Therapy” only. And correct me if I’m wrong, but I’m pretty sure there is a part missing in the beginning of the track, the first bridge…Like someone was leaning on the pause-button and after some seconds thought “Fuck! Don’t tell me this has happened”. Besides the Dynamo gig, there are 7 tracks from the tour Pestilence did with Monstrosity and Torchure the same year, recorded in Rotterdam. The quality of the sound of this gig is less comparing it with the Dynamo one, the recording is good still. “Presence of the Pest” is a nice live document for every Pestilence fan or Technical Death Metal fan in general. As said before, Mameli dived in his archives…and so did I with an old interview. Hope you enjoy that one as well. (Ricardo)