Pestilence – Reflections of the Mind 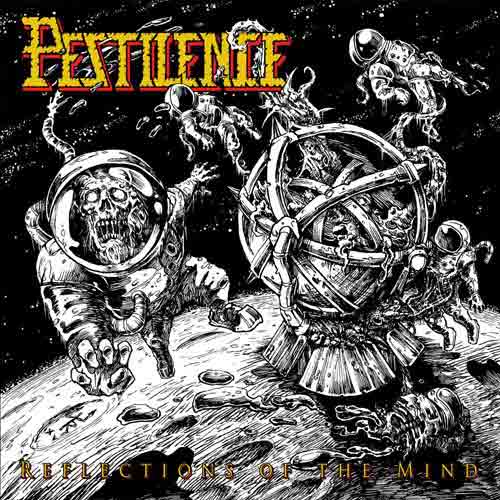 The basement at Mameli’s house is full of old Pestilence recordings. Throughout the years a lot of demo recordings and rehearsals were featured in the compilations within the Pestilence discography. Almost all of them pre-“Testimony of the Ancients”-era. It seems he was in a nostalgic mood went down the basement again. Besides the live-compilation, Mameli found another box full of old school TDK SA-90 cassettes with demos and rehearsals from the “Testimony of the Ancients” and “Spheres” albums. As you all know, “Spheres” is quite a controversial and disputable album back in the days it got released. Many didn’t accept the transformation that got got extended after the release of “Testimony of the Ancients”. The jazz/fusion Technical Death Metal, it seemed the world wasn’t ready for it in 1993. The album is much more appreciated at the moment and especially musicians respect it. Personally, I still get nervous hearing the complexity. Sure, I acknowledge the high skilled musicianship but for me it’s not “catchy” nor does it stick for one bit. But if you like “Spheres”, you will enjoy it as the sound is very well remastered. No, I draw the line underneath the mighty “Testimony of the Ancients”, and half of the compilation is filled with rehearsals of that album as well. The sound is less comparing it with the “Spheres”-recordings as it has a typical rehearsal sound, yet it is still audible. You will find a track called “Omens of Revelations”, which seems to be a pre-version of “Prophetic Revelations” as you will hear similar riffs in it. To finalize the package, there is great artwork from Robert Toderico and liner notes from Patrick Mameli himself. Of the two Pestilence releases, I prefer the live compilation as I consider this one only mandatory if you want to have every release with the Pestilence logo in your collection. (Ricardo)