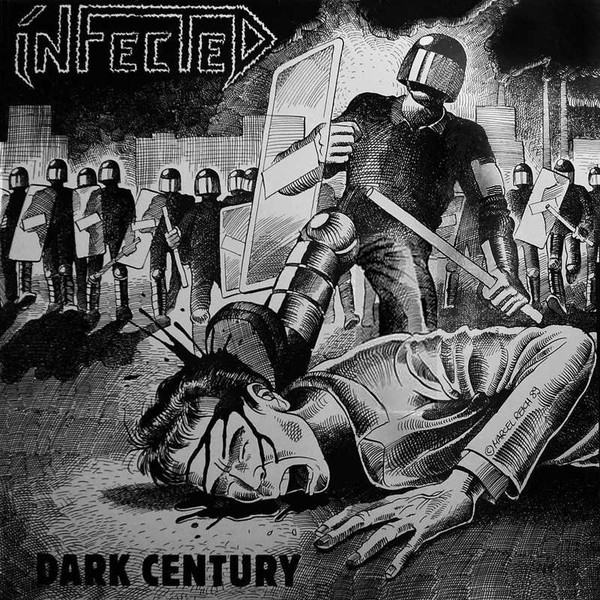 One sole album these lads created in the year 1989, to split up in 1990…talking about a short band career. So if you never heard of this band before…don’t worry, not really your fault. It seems they were one of the first Death/Thrash metal bands from Switzerland and founding member (Steve Karrer – great drumwork by the way on “Dark Century”) is the only one who still is active in another band called Messiah – also from Switzerland. Not that this band is that active, but they release at least 5 full-lengths.

Infected sounds more Thrash-oriented than Death metal, only the monstrous vocals stand for the brutal side of metal, but the hooks and riffs on this release are catchy and consists of a bunch speed shifters. Okay, so released in 1989, but remastered in 2018 by Vic Records as a cd-version, and in 2019 reissued by Floga Records as a limited (2 colors) 12” vinyl edition. Very nice riffs and ditto tracks to hear on this disc, where track “Brutalities Behind Your Back” rules in my opinion, especially cause this one has a nice song structure from beginning till end and “Headless”, probably the fastest track on here with nice bass-guitar. And do I hear Metallica-influences on track “Media Control”?  Yes, it seems this album was underrated back in the days, but for me it’s a nice discovery. (Fredde)