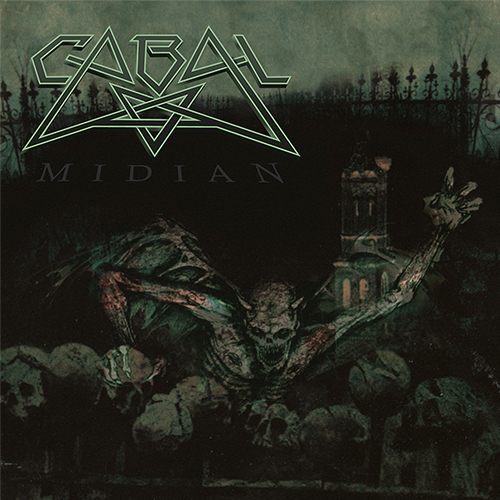 Exploring lost classics and experiencing them from different dimensions and perspective, might evoke similar impulse whenever archaeologists and scientists finds and announce about ancient beings, creature and civilizations those lived alongside human and it’s kind since eons. So, when “Midian” by Cabal, came up to me and I started exploring, it was like digging the crypt from a great past.

Unbeknownst about its existence, except being in awe about its association with Necrophagia legend Frank Pucci (Killjoy) and also the source of the name, which taken from Clive Barker’s legendary novella “Cabal”. Killjoy birthed this, after the initial breakup of Necrophagia. And, since formation in 1990; the Killjoy and quintet in question have only this debut and sole album in their discography entitled: “Midian”; which was recorded at Morrisound studio, in 1990 and was released through Red Stream Inc. in 1990. Then after being in the slumber for 26 years, in 2016, Dark Descent Records awakened this with a 12″ vinyl release and, later also released by Vic Records (CD) in 2019, to fulfill the undying thrust and desire of its fans and worshipers to behold this historic relic permanently.

Literally, “Midian” is the town where the monsters live in Clive Barker’s book, where “Cabal” and the troops of Killjoy takes a close look at the monsters, and discovers that there is a lot more to them than appearances and by both sound and vision in its seven tracks, ranging at around 30:81, lead you to believe and created a bizarre and enthralling world of it. Like a forlorn storytelling, the composition’s arranged in an intricately designed formula of Death/Thrash Metal amalgamations, which will evoke revulsion and admiration, anticipation and dread, like Barker’s invitation to explore the darkest contradictions of the human condition: our fear of life and our dreams of death. And, how Killjoy led this fanatic storytelling, can initially imagined by his inhuman vocal ravings on Necrophagia’s 1987 debut “Season Of The Dead” and “Holocausto de la Morte” in 1998, where basically his vocal was more or less raspified talking. From introduction with “Images in Blood” to deep into the tracks, “Midian”, “Dark Desires”, “God Complex”, “Khaos Theory” and “Nocturnal Reign”, will feel like experiencing all of monsters from city of Midian, where each monster is monstrous in a different forms and perceptions.

For more than two decades, this old-school Death Metal legacy, keep on twisting the worlds of horrific and uncanny fiction into a terrifying, transcendent genre all his own and adding that, mastermind Frank Pucci aka Killjoy (R.I.P), departed his earthly body on March 18th, 2018, influences immensely to the whole listening experience, as infested by the emptiness of his absence and also by the undying legacy he left behind. For those, not aware yet or those still listening since its introduction, both will experience “Midian” by Cabal, as an enticing discovery or re-discovery, that has a countless replay value & an enriching embodiment of headbanging or head – bleeding fanatic experience.

This will also make you question, why great albums like this turn into obscure rarities! Yet, you will be grateful to Vic Records and Dark Descent Records, who have resurrected this hidden classic from the dead and re-released for the future generations to explore and praise its existence and timeless legacy. (Rocky)