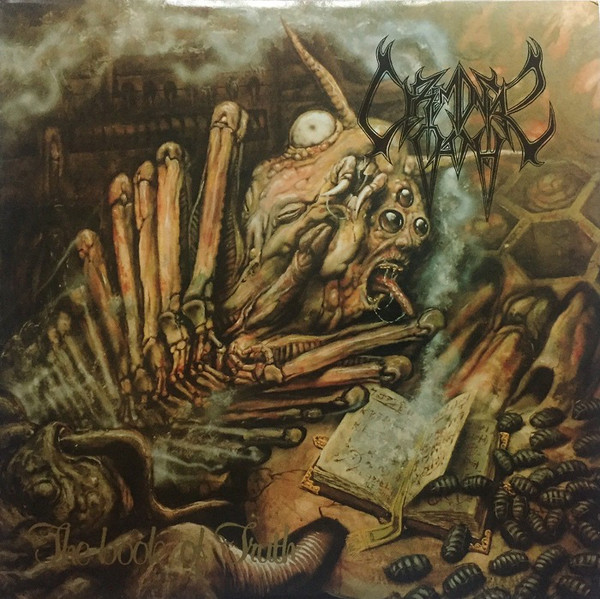 If you take any old Swedish extreme metal demo, EP or debut album and look at the line-up, list of external contributions or even thank lists, you are basically diving into a who-is-who world of the early Swedish Death Metal scene. Many musicians shared several bands in various formations. One of such bands is Ceremonial Oath. The band was founded at the late 80’s by Oscar Dronjak and Anders Iwers and would later be joined by Jesper Strömblad, Markus Nordberg. At the time they were starting musicians in their first bands, but would later turn into the much revered musicians in their later bands Hammerfall, In Flames, Cemetary, Dark Tranquillity and Tiamat.

Ceremonial Oath recorded a promo tape in 1991, which they aptly titled ‘Promo 91’ and that led to a deal with Corpse Grinder Records for an EP and pressed that promo tape on a 7” EP in 1992. Another year forward, in 1993, they were able to cash in on an album deal and came up with ‘The Book Of Truth’. An album that would turn into one of the pinnacles of Swedish Death Metal and many years later a very much sought after hidden gem, with the original CD and vinyl pressings selling for considerable amounts of money. It is this album that recently been reissued by a rather obscure Chilean label, Nihil Producciones and Floga Records taking care of a vinyl reissue, after the Century Media Records version from 2013 can now also be found in the more expensive sections of Discogs.

Basically they can be seen as one of the founders of the Gothenburg scene that spawned many a Melodic Death Metal band, like the aforementioned In Flames and Dark Tranquillity. Looking back at the bands curious revolving door-like history, with many members getting in and out (eventually the band would also feature In Flames vocalist Anders Fridén), Ceremonial Oath was some sort nursery for the scene. Not only in the sense of personnel Ceremonial Oath was of great importance of the development of the Swedish Melodic Death Metal scene (especially in Gothenburg). Other than most of their Swedish contemporaries, Ceremonial Oath added a lot more melody to their music and leaned much less on the heavy riff-based grooves of the likes of Grave and Unleashed. Together with bands like Eucharist and At The Gates they delivered the blueprint for the music that the Gothenburg scene would become famous for.

A musical style that was far more refined, using melodies and quieter passages that evokes an atmosphere that we associate much more with Black Metal today. Also the vocals are nothing like the grunts of LG Petrov, Ola Lindgren or Matti Kärki of Entombed, Grave and Dismember fame respectively. It is more of a scream-like vocal delivery that is not so much unlike nowadays Black Metal. With this in mind it is no surprise that Dissection’s John Nödtveidt mentioned that he enjoyed ‘The Book Of Truth’.

‘The Book Of Truth’ is an album that fulfils the concept of ‘cult’ and ‘classic’ in all aspects. It was massively overlooked at the time, it has been cited by many leading musicians as influential and it was the stepping stone for many of Sweden’s rockstar metal flagships. Keeping the album in print does justice to its wonderfully musical content, because, of course, that is what it is really about in the end. By the way, the second CD of the Chilean version hardly adds anything, the songs that band still recorded as Desecrator are musically far removed from what they did later. Only the two very last two songs, taken from their ‘Promo 1991’, are worthwhile, although they also appeared in their final shape on the album. If you haven’t had the chance to pick up this piece of Swedish Death Metal history: don’t sleep on it.