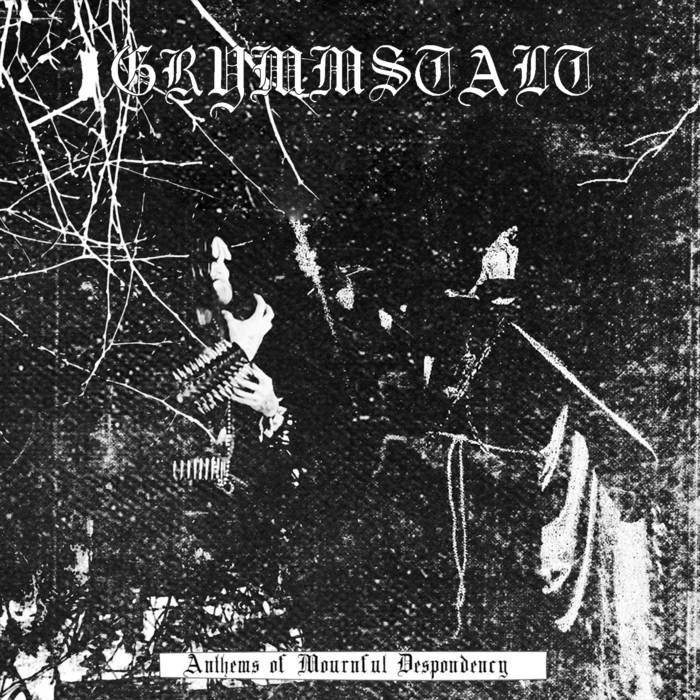 Not too longer after the release of the band’s single demo tape, they are presenting their first full-length album through Signal Rex. And, basically, ‘Anthems Of Mournful Despondency’ not only fits seamlessly to that demo tape, but it also fully lives up to its title.

Due to its Lo-Fi production it is rather hard to discern, but I wouldn’t be surprised if the tracks on this album are from the same take or session of the demo. Or maybe just even the very same recordings. Apart from that lingering, acoustic intro of the demo tape, both of the other tracks also ended up on this subsequent album. This means that, musically, Grymmstalt is offering the very same sort of experience to the one of that first feat. Drawing influences from Burzum-esque, subdued but emotional sort of elongated riffs and hypnotizingly repeating melodies, it is music that creeps up your spine and crawls under your skin. Its hollow-sounding character and the desperate laments of Wampyric Strigoi gives the music that unsettling mournful nature. Very much akin to what is commonly referred to as ‘Depressive Black Metal’, a term I always have difficulties to relate to because of pretentiousness, but Grymmstalt really lives up to that Black Metal sub genres’ ideology.

Since the recordings are so very similar (or identical) to the ones I heard on the band’s demo tape, the conclusion is also the same. Of all Lord Valtgryftåke’s generally rather average sounding recordings I have heard, alongside Gryftigæn, Grymmstalt really is the best he has to offer.