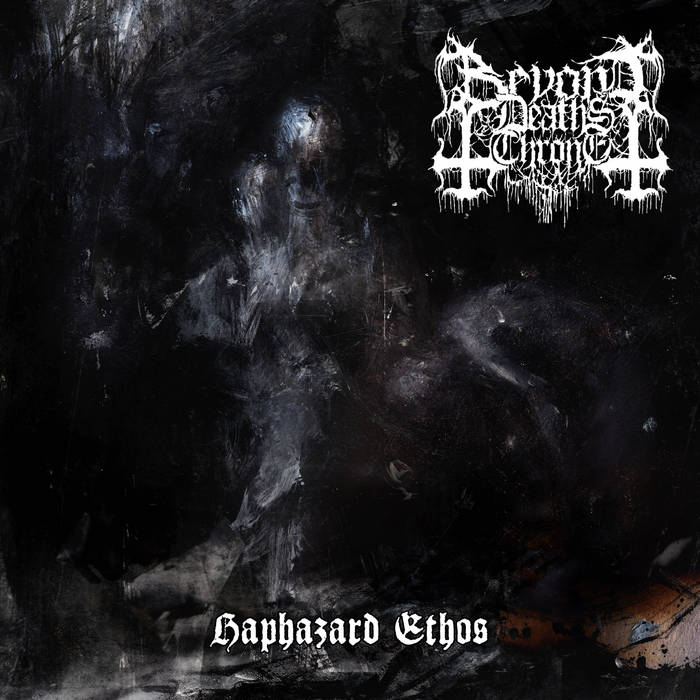 ‘Haphazard Ethos’ is the debut EP from Catalan Black Metal duo Beyond Death’s Throne; a four track ode to necromancy, the occult and death with a huge slice of misanthropy thrown in for good measure. The EP was originally released on cassette by label Abyssal Spectra, and has since been put out on both CD and LP by Signal Rex. (The LP was a joint release with Duplicate Records)

The aim of any debut release is to leave a lasting memory, and Beyond Death’s Throne lay down a real benchmark with this EP; one that bodes extremely well for their future output. Following a slow and climactic build up, opening track ‘A Threshold Of Harrowed Chants’ expands into a colossal sounding piece with a huge bombastic drumming display and powerful icy guitar leads forging the way ahead with dominance. Into the mix is thrown some intricate and domineering rhythm guitar sections and solos, a tremendous amount of bass rumble and a harsh vocal display that feels like it is rising up from the depths of a blackened cavern.

Each of the ‘Haphazard Ethos’ four tracks are created with furious bursts of intensive unrelenting aggression but also with moments of calmer, more methodical and calculating broodiness, and in the case of both ‘Diaphanous Lethargy’ and ‘The Endless Will’, an overly ritualistic feel to some of the more chanted vocal work. The latter song also has a satisfyingly dark and malicious sounding extended intro section that then explodes outwards into the bands most vitriolic and chaotic moments yet.

This impressive debut EP closes with the measured fury of ‘Perpetual Glow Of The Risen Wise’. Beyond Death’s Throne have created an excellent opus of controlled malevolence through a mixture of intense songcraft and tight flowing musicianship. Each of the four tracks has its own sound and story to tell, and as a whole the intense grinding melodies and chanted ritual like ambiance that rises to the surface throughout makes this EP a very worthy addition to any collection.