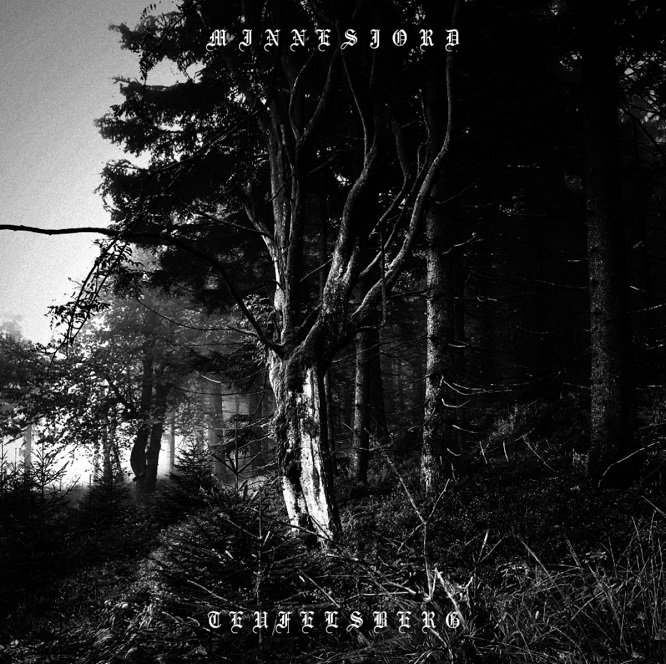 There exists something that is quite enthralling about harnessing the essence of primordial methods and creating an exquisite entity from the rawest forms of materials, I guess because it all comes down to the one notion, the creation that lays before you was a seedling within your mind that has come to realization, constructed by hands and the elements of nature, like a fire sparked from an ember by stones, the same fire can give the body warmth, but the same blaze can devour a forest without hesitation. This would be the description that one may use when recalling the split collaboration, ‘Minnesjord/Teufelsberg’, for it is an album that dispels an energy in the most crude and unpolished manner, but the way that both bands direct the flow of expulsion is what makes this split unique and creative.

Minnesjord’s general composition is made up of simplistic guitars and percussions, there exists some variety with the picking as well as the drums, but in summary the variations is dependent upon the stream of aggression that courses through each track changing the musical path but still aligning to the same spirit. In other words the instrumental aspect, though primitive, does not detach from the overall experience, in fact it magnifies it as it demonstrates the layers that can be extracted from the veins of aggression, an instance of this is the track, ‘Vitupério’ whose musical pathway is rather straight-forward in terms of playing, but it is the atmospheric tinge that makes each chord and beat resonate with a dense feeling, in other words, the musical construct of Minnesjord needs not a labyrinth of complexities to dispel a wraith like aura….just like a sword whose deadly blow can arrive from a singular swift strike, so too does Minnesjord musical potential can be synopsized. A highpoint of Minnesjord’s offering upon this split is the vocals, where the musical elements are configured in a minimalistic fashion, the vox imbues itself within this vessel contorting its visage into a ghostly demeanor. The wails that emanate forth sounds like the horrid cries coming from one whose flesh has been infected by a foreign spirit, where convulsions rack the stomach as howls of pain escape a dried throat, the song, ‘Mavórcio’, displays this tormented tongue as the verses spewed are twisted into various patterns that slither amongst the instrumental notes.

Where Minnesjord molds a macabre atmosphere with its spectral tones reverberating forth, Teufelsberg, takes a different approach, as instead of having the sounds emitted in close proximity or in other words meshed together into a wall of noise, the instrumentation still employs the rudimentary playing gives the illusion of being spaced apart… but it’s the aura expelled from the instruments that flows between the gaps created, giving a more compact delivery. A positive of this portion is the vocal delivery that exhales a primal, cold air that is enough to transmute warm blood within veins to streams of thin ice, however the vocals even though frozen in nature is not the slick, icy vox, however its gives the weight of the permafrost, the cold that burns. ‘Culte Des Morts’ is a standout track on this split as it adopts a slow like groove that amplifies that creeping, consuming frost-like atmosphere with ever crash of the drum, even though the tempo speeds up, this is a song that exemplifies that the striped down approach can be as very much effective (sometimes more) than a plethora of progressive riffs….why? Simply because of the ambience that is spawned through the music.

Overall, this is a fantastic split that demonstrates the different shades that can be discovered within the catacombs of Raw Black Metal, it also places an emphasis upon the several distinctions that can be crafted from the most basic song structures, and this is what ties together the split into being a concise and effective package. (Justin Joseph)