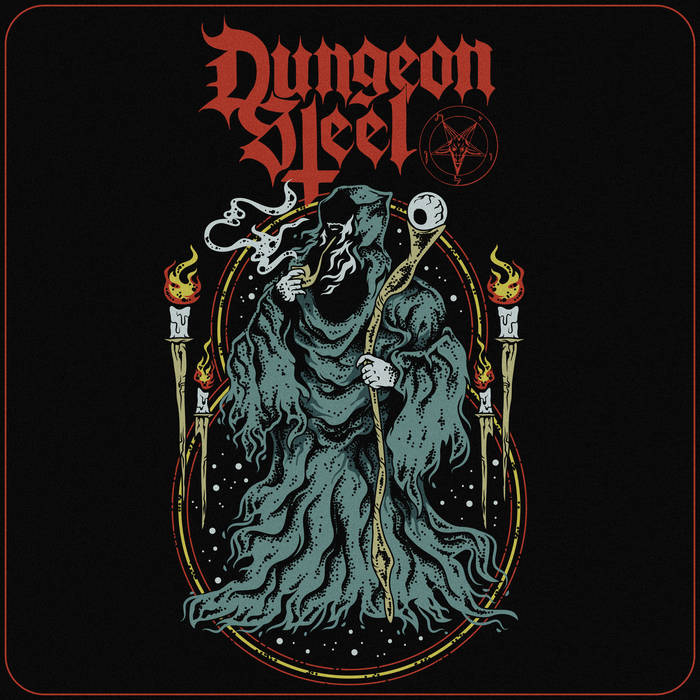 Satanic Speed Black Metal from Loja in Ecuador, Dungeon Steel consist of two maniacs by the name of Eblis Destructor and Wampyric Strigoi who also play in Ambient Black Metal band Aurae Lunae and Raw Black Metal band Wampyric Rites together. Last year they unleashed their debut EP ‘Bloodlust’ on cassette and LP through label Signal Rex, and the a six band CD split through the same label. September this year saw the band return with another Signal Rex released cassette EP, this time entitled ‘Night Entity’ and sporting some very striking cover art that fits in nicely with bands of a similar ilk, as well as a rather snazzy looking deep red pro cassette.

A little bit of technical guitar based wankery to open things up and then were off to the races with a bass heavy fast paced groove, lots of simple hard hitting riffs and drum beats, and for a little spice some nicely executed melodic guitar rhythms and steely solos. Opening track ‘Count’ is a real feel good groove drenched affair, lots of rhythm and technical wizardry, and apart from the odd wail from the vocals is purely instrumental. This really is just cool sounding riffs and drumming simply for the sake of it; got to love that! ‘Count’ then winds down slowly and is topped off by a terrific bit of noodling on the bass.

Turning up the tempo and temperature is ‘Evil Spells’ which sees the introduction of echoing, cave dwelling vocal work whose lyrics fly out at record speed in a hypnotic array of mumbled harsh growls and ear piercing shrieks. Once more the riff/drumming combo is kept simple but is fast and fluent, whilst the bass play rumbles on remorselessly in the background. Title track ‘Night Entity’ finishes off this raucous and fun EP with a more methodical intro that makes way for great wailing and gnashing of teeth to the accompaniment of more energetic guitar work. My only real criticism of this EP is the vocal work which is rather mumbled and also gets lost in the mix a little, whilst some of the higher pitched stuff is unbearable. Musically though a very enjoyable offering.