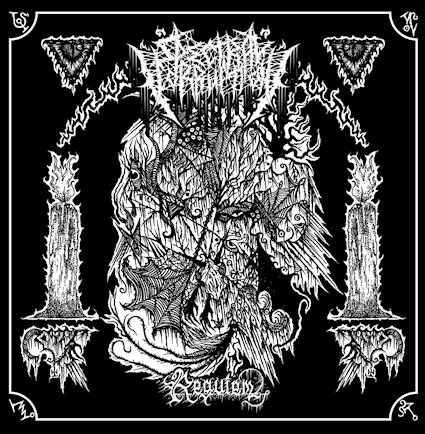 I reviewed the latest Alkerdeel album earlier today, and during that interview I noted how rare it is that a Raw Black Metal release came with such impressive production. Well thanks to the sophomoric album from Slovakian purveyors of all that is both raw and Black Metal, namely Spectral Corruption, it would seem that I was talking out of my arse! Now whilst ‘Requiem; doesn’t hit the glossy sleep production values of the Alkerdeel album, in no way would I call this opus a lo-fi sounding record. This album comes a year after the bands debut, ‘Colourless Rays of Sun’, and has been released on CD by label Signal Rex, with a cassette and LP release to following in the new year.

Intro track ‘Preludium’ builds both momentum and suspense extremely well before this Slovakian one man project lets loose with vengeful ravenous riffs, roaring vocal work and a hyper-aggressive drumming style. Spectral Corruption forcefully forges ahead with unheeding dominance, and creates a maelstrom of whirling darkness and punishing malevolence. In truth there is little to no deviation through tracks ‘Atrocious Insurrection’, ‘Souls of Abhorrence’ and ‘Devotion of Desolation’, but then with track names such as those its to be expected that this album would solely focused on unrelenting, barbaric abrasiveness.

It isn’t until ‘The Destiny Awaits’ that the pace slows and a more cautious style is adopted, though no less potent in its malicious intent. This though is a very respite and the vitriolic urgency soon continues unabated. ‘Requiem’ ends with a cover version from a band who also dabbles in Raw Black Metal and has become rather popular as of late, but I’ll I won’t divulge all of this albums secrets entirely. You’ll have to listen for yourself to find out. What i can say is that this is a frank and honest album, one dimensional in its creativity but breath taking in its hostility and intensity.