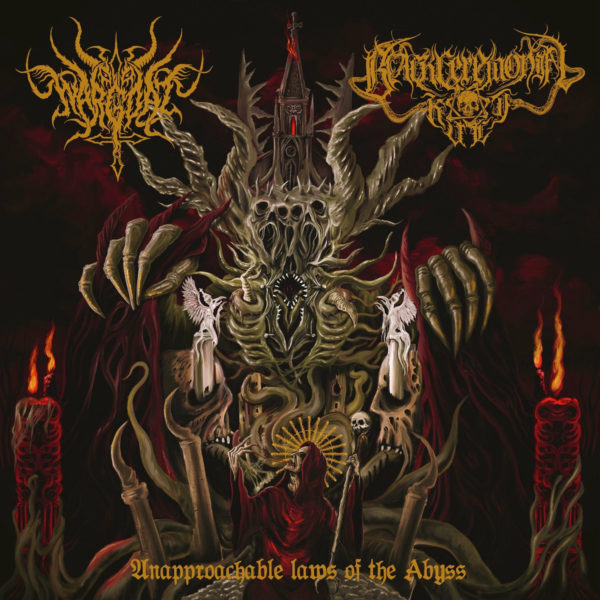 Two hordes of the black blood joined together to proclaim the unapproachable laws of the abyss. Wargoat from Greece vomiting blasphemies since 2006 and Black Ceremonial Kult from Chile, a crushing band spreading their cult since 2014. Once again a split which I can recommend to the Black/Death fanatics out there. Wargoat play some killer Archgoat like Black/Death with deep rumbling grunts and a straightforward simplistic approach, all in a more melodic way than the Finns sometimes. The songs are real headbangers, sometimes even reminding of Dismember (lead riff on one the songs) or Doom/Death masters Asphyx. The alternation between fast tempos and Doom sections is triumph. Some killer standout bassline is in as well as some killer fills on the drums side. The last track is with clean guitars only and creates a dark atmosphere. Cool way to end their side of the split.

Black Ceremonial Kult start with an otherworldly intro before chaos is unleashed in its most barbaric form. Totally destruction led by a human octopus blasting all the way. Heavy riffs on the tremolo and chord side of the spectrum, same goes for the bass and some infernal reverb drenched vocals that vary between caveman growls and shrieks from the abyss. The band also knows when to slow down and create a dark vibrating aura of big proportions. Some thrashy riffing accompanied by the drums remind me of some Repulsion as well sometimes. The throat singing towards the end is just haunting before it shifts to another face melting track. This is a killer split, all rounded up by an amazing artwork by Nether Temple Design. (DPF)