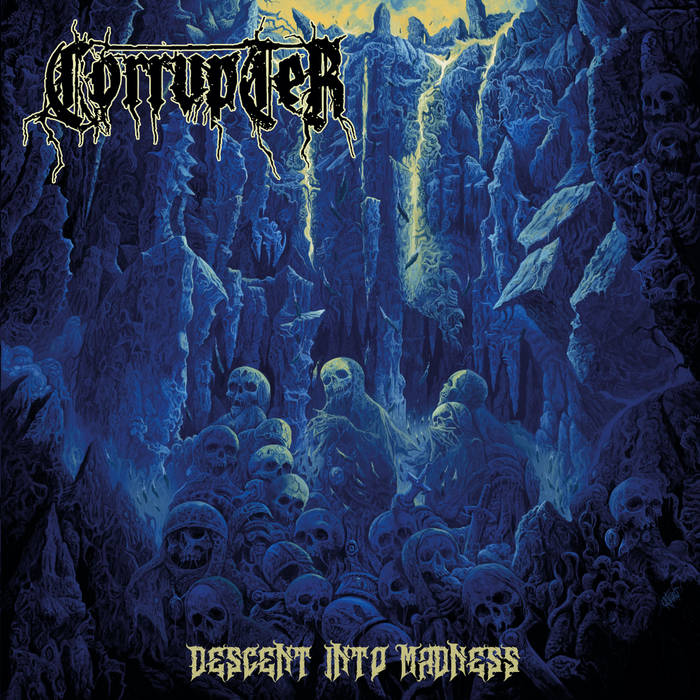 ‘Descent into Madness’ is the debut album from French Death Metal duo Corrupter. (Both members are also active in Brutal Death Metal/Grindcore band Morgue) Godz ov War productions have got a hold of this opus and have unleashed it on CD. Despite being from France, Corrupter sport a distinctly Stockholm sounding brand of Death Metal, and in truth the impressive cover art fits in with that style also. The duos core sound is one of brooding, dark riffs backed by a thunderous drumming display and voiced by raw, poisonous sounding growls. Whilst Corrupter are comfortable bashing out fearsome abrasive riffs, there is actually a hell of a lot more going on with this album than sheer brutality.

‘Descent into Madness’ is an apt title for this debut offering as Corrupter go to great lengths to include a variety of bleak, uneasy guitar rhythms and melodies that weave a take of darkness and despair that leads over time to an unsettling maniacal atmosphere. So one moment Corrupter are thundering along with intensive grinding riffs, the next they are ploughing a slow and methodical furrow of engrossing yet predatory guitar tones backed by cavernous drumming that casts an appalling gloom over the album.

The production is also of a high standard with just enough deliberate murk about the sound to give off a really sinister flavour. My tracks of the album are ‘Into the Hearse’ and ‘No Life Here’, the former a powerful overwhelming display of musicianship mixed with great songcraft, whilst the latter is a cross breed of belligerent riffing and slow, calculating melodies that speak of doom and death. So whilst Corrupter have opted for the well worn HM2 sound that many a band over the last thirty years have utilized, this French duo have expanded on it somewhat and turned it into something feral, menacing and insanity inducing.