Misanthropic Rage – Towards the Greyscale Aphorysm 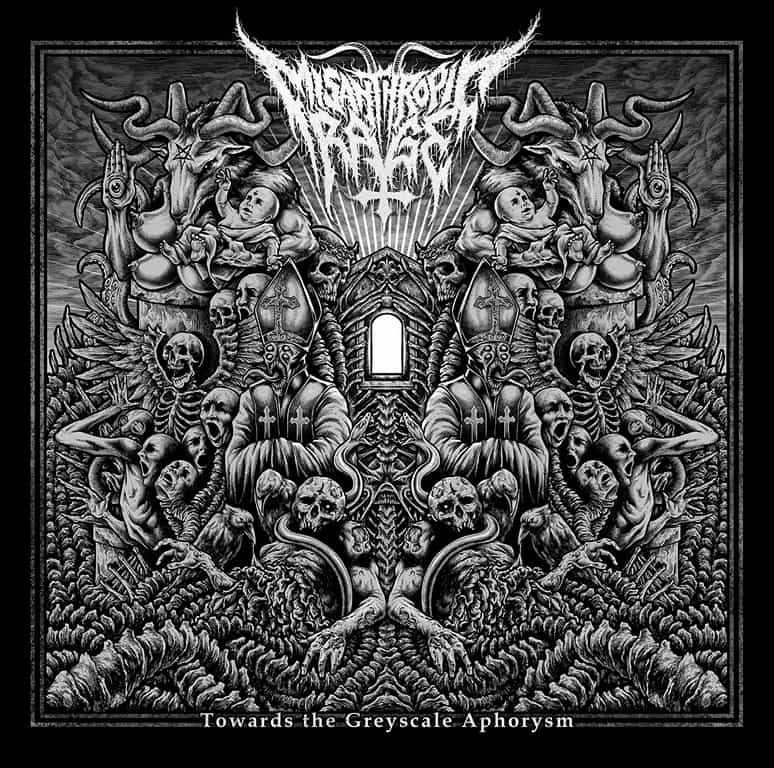 The amount of quality Black Metal coming out of Poland lately is astounding. Of course, Behemoth is the pinnacle of Polish exports of all time of this genre, but newer bands such as Batushka, Black Goat and Misanthropic Rage are all making their mark on the International Black Metal scene as well.

Since its formation in 2015, Misanthropic Rage has delivered an EP and three full-lengths, including their latest opus “Towards the Greyscale Aphorysm.” Featuring Artur “Jankes” Jankowski (all instruments/vocals) and Dawid “Wilku” Staręga (vocals), the duo creates melancholic and pessimistic music decorated with a hybrid of gothic elements, Black Metal and Death Metal.

The band’s lyrics are filled with rage and misanthropic hatred, which are accompanied by aggressive instrumentation along with scathing, appalling vocals consisting of varied ranges from higher screams, to soaring, melodic cleans, to haunting howls to raspy mid-range to low, putrid guttural growls. With each passing moment, the music is expertly layered with melancholic melodies, dark dynamics with pulsating and reverb-laden, tremolo-picked guitar melodies, which capture the listeners imagination and attention throughout the 41-plus minute runtime.

“Towards the Greyscale Aphorysm” immediately kicks in with the first verse, which is decorated with a heavy gothic vibe and eerie, distortion-laden riffs. Ominous, melancholic and gothic overtones (“The Traveller”), wailing feedback guitars (“The Noise of a New Dawn”) and post metal elements gleefully greet the listener. More aggressive ragers greet the front half of the album (“The Noise of a New Dawn,” “Nothing but Rage”), while slower tempos and longer compositions grace the back half of album with the almost 10-minute epic “The Traveller” and the seven-plus minute album closer extravaganza “Despise-Reject-Deny.” Both tracks don’t wear out their welcome, as they are very engaging from start to finish, leaving the listener pleasantly hypnotized.

By combining twisting elements and mixing genres and atmospheres with hypnotizing passages, the band’s music is experimental and varied and doesn’t just stick to the standard Black Metal fare. “Towards the Greyscale Aphorysm” is an unpredictable and surprising album, yet pleasing and rewarding with a high replay factor that will keep you coming back for another listen. (KaosSimms)