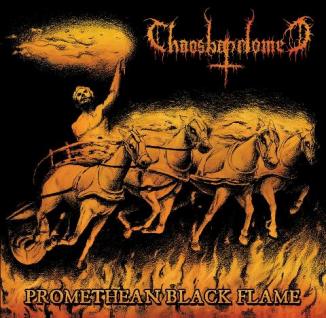 Black Metal and Greece, it is something mystical for me. I have mentioned more than once in my reviews that I think the old Greek sound is something special. Chaosbaphomet doesn’t have the typical sound of the old Hellenic legends, but they do manage to create something mystical and obscure with their debut “Promethean Black Flame”. As they don’t betray their roots, you can imagine some keyboardless Necromantia (there are subtle keyboard parts, but there are far less compared with Necromantia) mixed with early Samael. You will also get a little treat at the end, as Chaosbaphomet covered Necormantia’s “Spirit Forms of the Psychomancer” of the mighty “Ancient Pride” EP. Although you have read Necromantia a couple of times in the last minute, I would like to emphasize this is not a Necromantia-worship album. No, these guys created a fine piece of occult Black Metal themselves and I can only say: “Recommended!” (Ricardo)