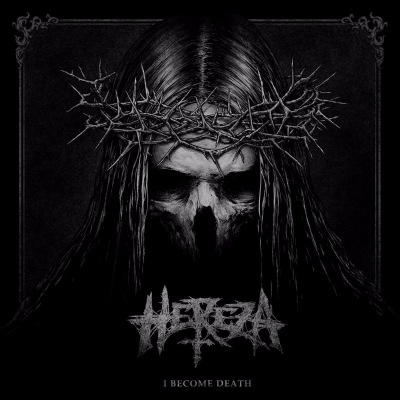 “I Become Death” is the sophomore release from these Croatian offenders and an absolute beast of an effort. Hereza plays a somewhat “groovy” and crusty brand of death metal, with a delivery so intense, you’ll feel like you’ve just been hit by a speeding dump truck. The songs on “I become Death” are incessantly heavy and hard-hitting thanks to a stellar production job. There’s a considerable amount of Swedish influence oozing in these songs — bands like Dismember and Grave comes to mind; however, I think it’s safe to say that Hereza is a bit more brutal than those bands. The drums are programmed, but not in a terrible way; it sounds realistic and cohesive for the most part. My surmise is that the band intented to record an album that’s more or less the musical equavalent of a nailbomb exploding in your face, and I think they’ve succeeded. (Filth Bearer)