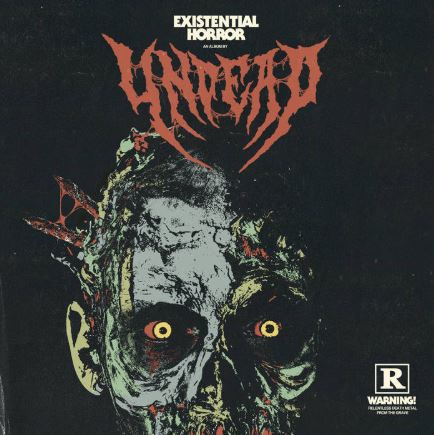 Ghastly beings, zombies or simply “undead” still seem to fascinate human mortal beings. Undead, a Spanish Death Metal band from Spain/UK have been attracted from these brain eating figures as well and formed in 2013. In 2015/2016 they released their EPs “Blood Enemy” and “Redemption” which caught the attention of horror worshipping maniacs. In 2019, so last year, Godz ov War Productions unleashed their first full length “Existential Horror” upon the mortal masses. Let the feast begin:

First, the look. The artwork with that zombie head not only looks cool but full retro, like old horror movies style in terms of layout.

The sound: Necromorbus Studio in Sweden should be known to many, and this records was mixed and mastered there as well, great job by Tore Stjerna.

The songs: Fast, straight, brutal, catchy, bangable, enough versatile to keep things flowing and interesting. Innovation? No, not needed here. Old Death Metal all the way! A couple of years ago a band named Repugnant unleashed an album called “ Epitome of Darkness ” after their split and became cult. Many great acts like Tribulation, Necrovation, Maim and many others followed and did great as well. Undead rank definitely amongst them with “Existential Horror”. Almost every track is killer, a few sound too familiar, but that’s a minor criticism. “Haunted by Hate”, “Masters of Mankind” or “Sin & Death” are just 3 great examples of songs that bring all the ingredients to please morbid tastes. The Repugnant similarities are huge on some tracks and you can definitely say they did their homework. Plagiarism? More worship If you ask me, well executed!

Overall a killer debut If you like Fulci-induced retro Death Metal done well, and I do, this might be something for you! Repugnant/Tribulation fan? Then this is some existential horror…(DPF)