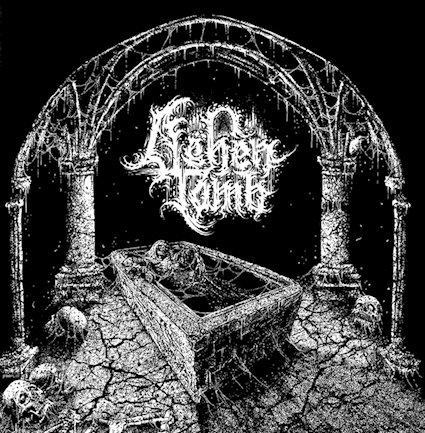 Wonderfully eerie and evocative artwork, a hauntingly melodic and bleak introduction and followed by some bitingly raw and feral Finnish Death Metal, the new self titled EP release from Helsinki based Ashen Tomb (Released by Personal Records on CD this coming January) may only be three tracks in length and fall short of the fifteen minute mark, but it leaves a crumbling ruin in your mind, a scar that won’t heal. Opening track ‘They Live Beneath’ slowly builds to a crescendo of cavernous drum tones, monolithic and dark guitar leads and something wonderfully used foreboding synth tones, before exploding in a feral spout of aggression and savagery through monstrously fast riffs and punishing old school drumming. yet that isn’t all, and the band then embark on a slower, far more intensive sounding series of technical guitar melodies that pierce the gloom with their brightness, before the tomb dwelling riffs once more rain down with more blackened barbaric power. ‘Graveless Abomination’ is far more deadly and frenetic endeavour, with a calculating undertone but also sporting a hurricane of belligerent drum tones and unrelenting riffs, not to mention deathly growls that sear the throat and a healthy does of punishing bass play. Ashen Tomb end with a song whose name is longer than my description for it, “Bleak Earth That Used To Host the Ignorant Race That Foresaw Its Doom And Did Nothing (Exterminated the Pest that once Depraved Its Body)”, being that its more of the same fare as before, just as heavy and just as lethal. What a stunning savage EP to start the new year with!