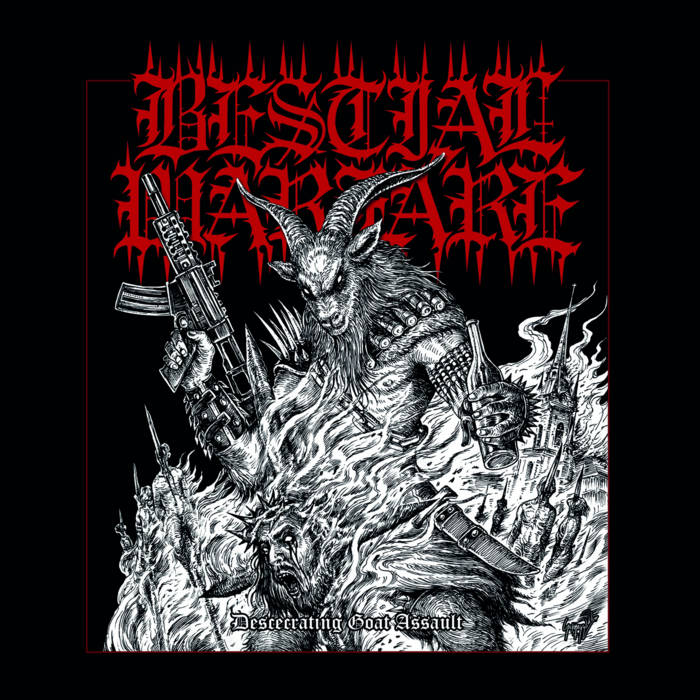 The newly formed German Blasphemers, Bestial Warfare reveal their second offering in the form of an EP titled, ‘Desecrating Goat Assault’, if you aren’t familiar with Bestial Warfare they are Black/Death Metal band formed in 2017, since then they have released one Demo (2018) and one EP (their most recent material as of 2020). The unholy horde rank comprises of 3 members whose alliance deliver a ritualistic and discordant performance compact into 5 tracks clocking in close to 22 minutes, whose essence is enough to deconsecrate and ravage sacred grounds.

The production of the EP takes the form of a stripped down approach, raw in its aura, secreting a visceral and unsettling mood, this is accomplished by the live feeling expelled from each vibrating note making the listener feel as though they are witnessing this impious desecration around them. The mix feels unpruned and bears its thorns in a haphazard fashion, while this may be a negative for some, the unpredictability of the mix adds a second layer to each track transforming it into an almost living beast, that is famished with hunger and seeks to devour flesh and bone by any means necessary, The track, ‘Genocide Ceremony’  showcases this with the cacophony of noise dispelled from the instrumentation, the sound conjured however does not feel mindless but it does feel unhinged and primal, the positive element here is where Bestial Warfare takes the reigns of this creature and directs its bloodlust to their own desire, hence shaping the chaos to each track.

The drums and guitars are mixed in such a way that they feel like the weapons of mass destruction, instead of using it to form a wall of sound to uplift the actual music structure instead it gives forth a rebellious nature to its playing, reckless and uncalculated. The guitars employ your standard tremolo picking but takes different dynamic shifts to carve a path for the grooves of the percussions, which discharge a thick tone with every beat. A highpoint of the instrumental elements is the union of both drums and guitars where they work in tangent with one another to deliver an obliterating assault, take for instance the track, ‘Human Sacrifice’ which features an alliance between both instruments that pulsates throughout the track.

The overall vibe produced from the EP feels feral in nature and this is due to the vocal delivery which paints the illusion of titan spewing forth sermons of depravity with the tongue heavy with words of vile, the force delivered by the vox can crumble monuments with its sheer power. If the instruments is the Warhammer that is forged, the vocals is the beast that wields the weapon to cave in the bones of its enemies and shatter the sacrilegious shield.

Overall for those who find pleasure within chaotic sounds crafted with the intent to evoke a negative aura, then this may be the material for you. For a newly formed band, and their second release, it’s quite promising and displays much musical prowess to keep me eager enough to wait their future releases. (Justin Joseph)